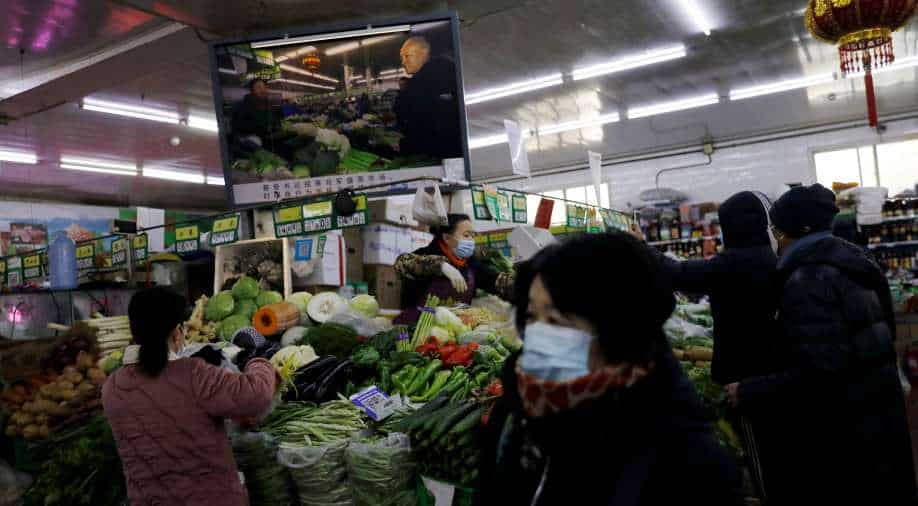 (File photo) People shop for vegetables at a market in Beijing Photograph:( Reuters )

It all started with a notice from China’s Ministry of Commerce on November 1, directing local governments to encourage people to stockpile 'daily necessities', including vegetables, oils and poultry, in order to 'meet the needs of daily life and emergencies'.

Long serpentine queues, people jostling and fighting at the supermarkets to stock essential food items: These are the scenes of panic buying that is being witnessed across China—which is bracing for a fresh surge of COVID-19 outbreak and a long winter season.

Army biscuits and luncheon meals are becoming the most searched items online. Rice, soya sauce, chilli sauce are trending in Alibaba’s e-commerce website, even as vendors are running out of stock. According to reports, the top search on the internet in China reads household stockpile list.

It all started with a notice from China’s Ministry of Commerce on November 1, directing local governments to encourage people to stockpile “daily necessities”, including vegetables, oils and poultry, in order to “meet the needs of daily life and emergencies.”

China is encouraging people to stockpile food which has resulted in mass panic buying. Many items are sold out and people are fighting over bags of food. It's unclear the real reason the Chinese government is encouraging this behavior. pic.twitter.com/gzdiBfzFYc

Anyone else seeing similar images coming out of China? Apparently people are panic buying? pic.twitter.com/zhG6RLgpbM

The order triggered a heated debate online, with some users speculating that the call to stockpile food was related to the possible outbreak of war with Taiwan, while others are attributing to impending lockdown owing to the fresh Covid outbreak.

“The government didn't even tell us to stock goods when the Covid outbreak erupted in early 2020,” wrote one user on Weibo social networking site earlier this week.

One video posted on Weibo by the state-owned news magazine China News Weekly shows long lines of shoppers at grocery stores in Changzhou, a city in Jiangsu province. Their carts are stacked full of produce and other supplies, while shelves throughout the stores are empty.

Supermarkets in various cities around the country saw flour, rice and other food items flying off the shelves.

The Ministry of Commerce responded by assuring people there was no imminent threat to the food supply, while the state-run Economic Daily newspaper tried to calm online speculation by saying that the intention of the notice was to make sure people were prepared for lockdowns or quarantine due to new coronavirus outbreaks.

“It's going to be a cold winter, we want to make sure we have enough to eat,” Reuters quoted a woman outside a supermarket in central Beijing.

China's National Meteorological Centre is predicting a plunge in temperatures over the weekend in the northwest, southwest and most central and eastern regions.

Meanwhile, China continues to report rising number of Covid cases in several provinces. According to reports, hundreds of locally transmitted infections have been found in about two-thirds of its provinces.