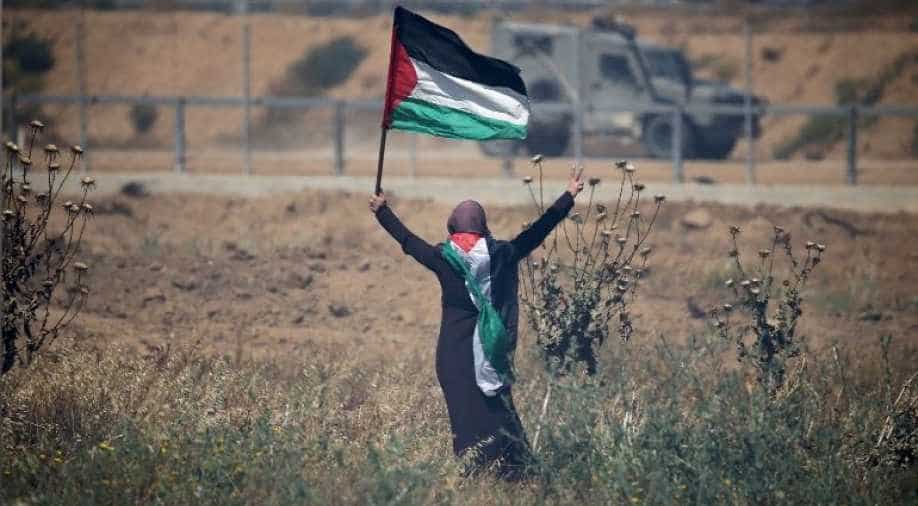 A woman holding a Palestinian flag gestures in front of Israeli forces during a protest marking the 71st anniversary of the 'Nakba', or catastrophe, when hundreds of thousands fled or were forced from their homes in the war surrounding Israel's independence in 1948, at the Israel-Gaza border fence, in the southern Gaza Strip May 15, 2019. Photograph:( Reuters )

The participation of Egypt and Jordan is considered especially important because they have historically been key players in Middle East peace efforts and are also the only Arab states to have reached peace agreements with Israel.

Palestinians urged Egypt and Jordan on Wednesday to reconsider their attendance at a US-led conference on June 25-26 in Bahrain, voicing concern it would weaken any Arab opposition to Washington's coming peace plan.

The United States has billed the gathering as a workshop to boost the Palestinian economy as part of a broader diplomatic effort widely referred to as President  Donald Trump's "deal of the century" to address the Israeli-Palestinian conflict.

The participation of Egypt and Jordan is considered especially important because they have historically been key players in Middle East peace efforts and are also the only Arab states to have reached peace agreements with Israel.

But Palestinians are boycotting the meeting, saying Trump's peace plan is likely to be heavily weighted in favour of Israel and to quash their aspirations for statehood in the occupied West Bank and Gaza Strip.

Israeli and US officials say Israel has yet to be formally invited, given discussions between Washington and Bahrain over what might be an appropriate makeup of an Israeli delegation.

"The Palestinian Authority urges Egypt and Jordan not to attend the Bahrain conference," Ibrahim Melhem, a spokesman for the Palestinian government said on Facebook after US officials announced the two nations, along with Morocco, would attend.

Melhem urged "all brotherly and friendly countries to withdraw", adding that participation "would carry wrong messages about the unity of the Arab position" on rejecting Trump's plan.

While the precise outlines of the draft plan have yet to be revealed, Palestinian and Arab sources who have been briefed about it say it has jettisoned the two-state solution. The plan faces possible delays due to political upheaval in Israel, where Prime Minister Benjamin Netanyahu must fight another election after failing to form a government.

Egyptian President Abdel Fattah al-Sisi said this month that Cairo would not accept anything the Palestinians did not support.

Tareq Baconi, an analyst with the International Crisis Group who is based in Jerusalem, said both Egypt and Jordan had faced heavy US pressure to go to Bahrain.

"This is a significant disappointment for the Palestinians because it is a breaking of the ranks in the Arab region. Their call to boycott has not been heeded," Baconi told Reuters.

After Israel, Egypt is the largest beneficiary of US military aid and received $1.3 billion in 2018. Pro-Western Jordan was allocated $443 million in US military assistance last year. Both countries border Palestinian areas and Israel.

US3 officials have said they are inviting economic and finance ministers, as well as business leaders from the region and around the world, to discuss investment in the troubled Palestinian economy in the Gaza Strip and West Bank.

Global financial bodies including the International Monetary Fund and World Bank will be represented.

Lebanese Foreign Minister Gebran Bassil said on Tuesday that Lebanon would not attend because "the Palestinians will not participate, and we prefer to have a clear idea of the proposed peace plan, as we have not been consulted or informed about it".

In a letter on Monday to diplomatic missions, chief Palestinian negotiator Saeb Erekat said the Palestinian economic crisis, which the conference is to address, was actually the result of what he called a "financial war waged by the Trump administration" as well as Israeli occupation.

Washington ceased its aid to the Palestinians early this year, dealing President Mahmoud Abbas another blow after recognising contested Jerusalem as Israel's capital in late 2017 and moving the US embassy to the holy city from Tel Aviv.

"If anyone is interested in the economic development of Palestine, they should tackle the root causes that prevented Palestinians from reaching their full potential in our country," Erekat said.