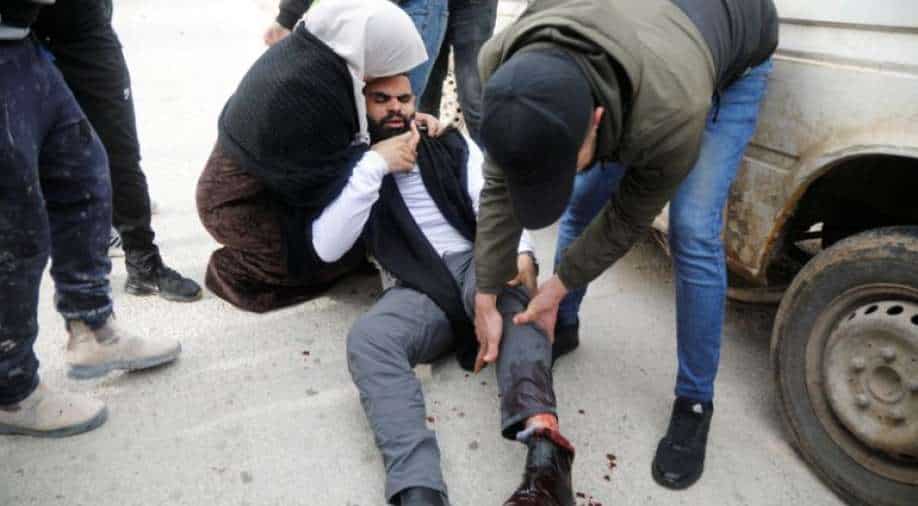 A wounded man lies on the ground after clashes with Israeli forces following a demolition of the house of a Palestinian man accused of killing an Israeli, near Jenin in the Israeli-occupied West Bank, March 8, 2022. Photograph:( Reuters )

Hamas, the Islamist group that rules Gaza, praised the stabbing attack as a response to what it called Israel's 'extrajudicial killings' of Palestinians in Jerusalem without arresting them or putting them on trial

Israeli police shot dead a Palestinian man after he stabbed two officers at a gate to Jerusalem's walled Old City on Monday, a police statement said. It was the second such incident in two days.

Police said the two officers suffered light to moderate wounds and were taken to hospital.

Hamas, the Islamist group that rules Gaza, claimed the attacker as a member. It praised the stabbing attack as a response to what it called Israel's "extrajudicial killings" of Palestinians in Jerusalem without arresting them or putting them on trial.

"These operations will continue as long as the occupation continues its aggression and its violations against the sacred sites in Jerusalem," Hamas spokesperson Hazem Qassem said.

A video on social media showed several police officers shouting and pointing their guns at the man as he lay on the ground at the Cotton Merchants' Gate.

Photos distributed by police showed a bloodied knife on the ground.

The state-run Palestinian news agency Wafa identified the man as Abdulrahman Qasem from Jalazon refugee camp near Ramallah in the occupied West Bank.

On Sunday, a Palestinian man who stabbed and wounded an Israeli policeman in the Old City was killed when officers fired at him, police said.

Later that day, Israeli soldiers shot a Palestinian who threw a fire bomb at an army post outside Jerusalem, a military spokesman said. Palestinian officials identified him as a 16-year-old who later died of his wounds.

Israel captured East Jerusalem and the Old City, along with the West Bank and Gaza in a 1967 war. Palestinians seek those areas for a future state. Israeli-Palestinian peace talks collapsed in 2014.