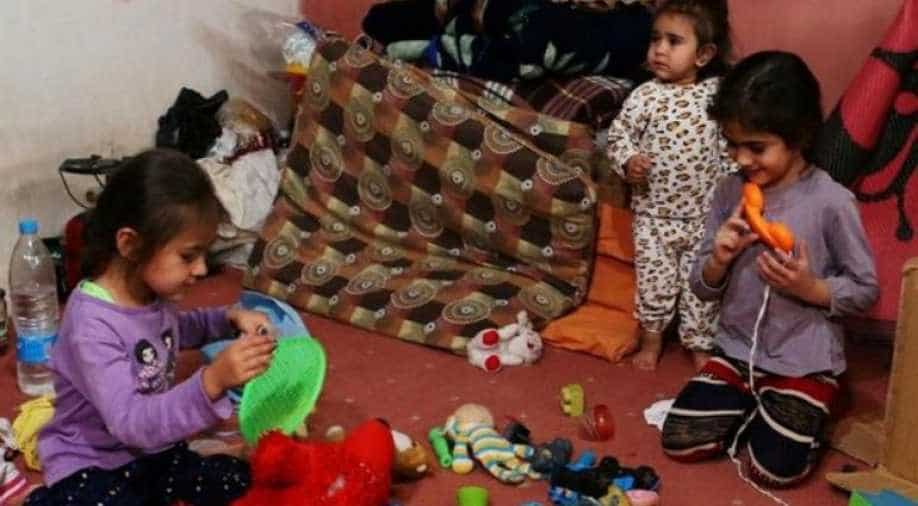 Syrian refugee kids play with toys inside a room at a makeshift Syrian refugee camp in the Lebanese border town of Arsal, Lebanon. Photograph:( ANI )

More than 370,000 people were killed and millions were displaced in Syria and abroad since the beginning of the Syrian war in March 2011.

Over 1,400 Syrian refugees have returned to their country from Jordan and Lebanon over the past 24 hours, the Russian Defense Ministry said on Tuesday.

'Over the past day, 1,412 people returned to the Syrian Arab Republic from the territory of foreign states: 311 people, including 93 women and 158 children, from Lebanon via the Jaydet-Yabus and Talkalakh checkpoints; and 1,101 people, including 330 women and 562 children, from Jordan via the Nassib checkpoint,' Russia's Center for the Reception, Allocation and Accommodation of Refugees, which is looked after the country's defence ministry, said in its daily bulletin.

According to the bulletin, the Syrian engineering units defused 40 explosive devices throughout the country, clearing 2.5 hectares (6.17 acres) of the territory from mines.

Syria is marred by civil war since 2011.

More than 370,000 people were killed and millions were displaced in Syria and abroad since the beginning of the Syrian war in March 2011.

The Russian-backed offensive has so far failed to make major inroads into rebel territory in northern Hama and southern Idlib provinces, where the Islamic State (ISIS or ISIL) is putting up fierce resistance in their last remaining bastion in Syria.

However, Moscow and the Syrian army have repeatedly denied allegations of indiscriminate bombing of civilian areas or any campaign to paralyse the daily life in rebel-held areas.

Russia has blamed the terrorist group for breaking a truce by hitting government-held areas and said Turkey has failed to live up to its obligations under a deal brokered last year which created a buffer zone in the area that obliges it to push out rebels.

According to the United Nations, nearly half of the estimated three million inhabitants in northwest Syria - including Idlib province and parts of neighbouring provinces - had already fled the fighting and moved to areas near the border with Turkey.