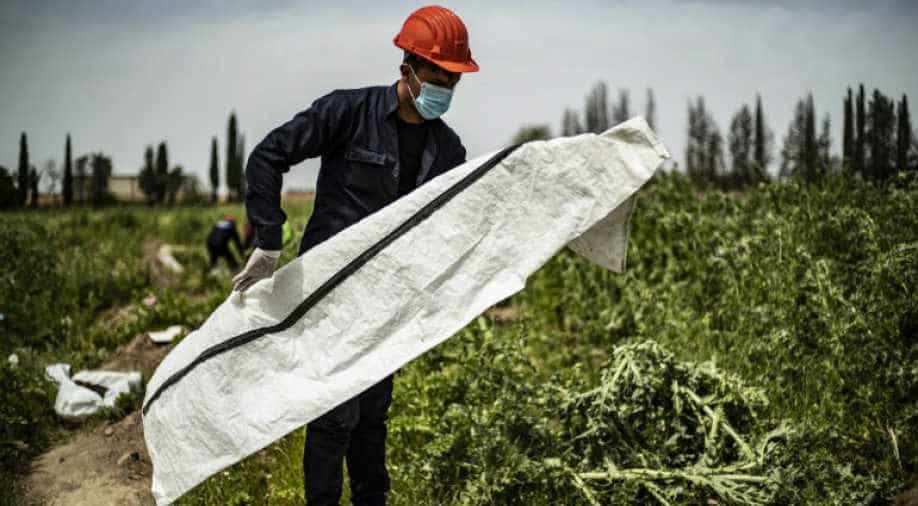 File photo of a first responders team holding a body bag at the site of a mass grave in the northern Syrian city's al-Fukheikha. Photograph:( AFP )

Mass graves are one of the most cruel legacies of terror group Islamic State. They are open wounds of families who wait for years before they know what happened to their beloved and give them proper burials. But only if they are ever found and identified.

In Syria's Raqqa, once the capital city of Islamic State, 200 bodies were found in a mass grave. But the count could go as high up as 800.

Five of those bodies were found shackled and wearing an orange jumpsuit - the same prisoners of the Islamic State terror group wore before their executions. Three women's skulls showed sign of death by stoning, a barbarian practice Islamic State terrorists commonly used.

Identifying corpses in mass graves is a challenge per se, and more so in a war zone. It requires DNA tests and forensic analyses but in war torn Syria, officials have to resort to more rudimentary methods.

"We have identified about 30 corpses in this mass grave thanks to basic clues: The hair, a wrist watch, a ring or even a hair clip or the clothes of a man or woman that the relatives have recognised," said Yasser Khamis, head of the rapid response team.

"To find the identity of the corpses was simpler in the town, because in the case of a destroyed building, relatives or friends knew who lived there, so they were known or there were documents there. But in the case of mass graves, it's very difficult, most corpses are unknown," said Mohammad Haj Hassan, a forensic doctor.

And everything needs to be archived and registered.

"They search, film, and a detailed report is written. Recently, a lawyer has been commissioned to make a legal report to keep in our archives and on our computers,"  said Hassan.

And given the numbers, the effort can be massive. In February, members of the Raqqa civil council found a mass grave containing 3,500 corpses, the largest so far.