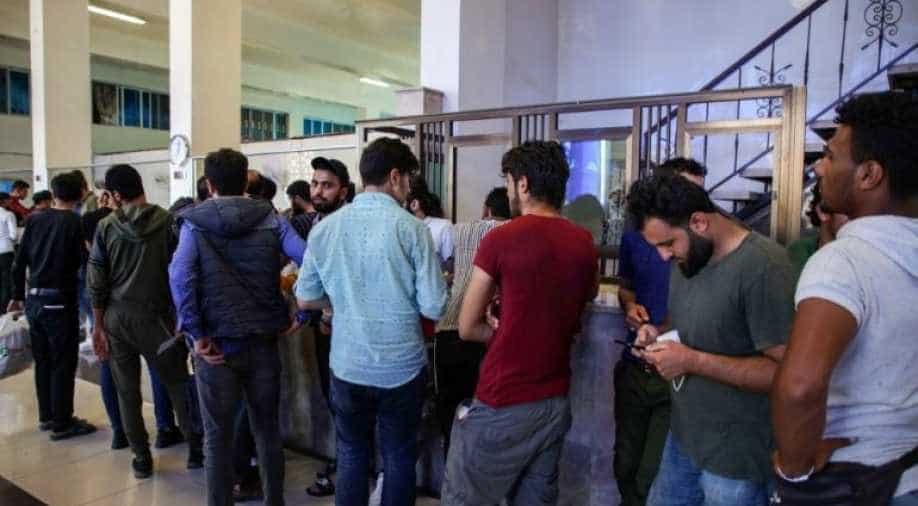 Incoming Syrian refugees who were suddenly deported from Turkey queue up to register with officials. Photograph:( AFP )

He was among dozens to queue up one morning last week to register with officials at the Bab al-Hawa crossing many in complete disbelief.

Still reeling from his sudden deportation from Turkey with just the clothes on his back, Mohammad Hassan stood in the arrivals hall at a border crossing in northern Syria unsure what to do next.

"I left Syria seven years ago," said the 22-year-old. "I don't know anything about this country."

He was among dozens to queue up one morning last week to register with officials at the Bab al-Hawa crossing many in complete disbelief.

With no say in the matter, he has just been bussed into the country's last opposition bastion of Idlib, administered since the start of the year by jihadists.

His home city of Aleppo to the east has been under regime control since 2016, making it near impossible for him to return to the former rebel stronghold.

"My family is in Aleppo but I can't go there," he said, looking dejected in a black jacket and baseball cap.

Regime forces have detained young men in areas they have retaken with Russian backing since 2015 and forced others to join President Bashar al-Assad's army.

Syria's eight-year conflict has killed more than 370,000 people since it started in 2011, as well as displacing millions at home and abroad.

Hassan used to live in Istanbul, where authorities are leading a crackdown on unregistered migrants.

They have arrested 6,000 including Syrians over the past two weeks, the interior ministry said last Wednesday.

Critics have raised concern over reports that hundreds of Syrian refugees have been deported, after being forced to sign consent forms in Turkish they do not understand.

Hassan said he tried several times to get a temporary residency permit but was refused.

"In Istanbul, they've stopped issuing them to Syrians," he said.

Without the right "temporary protection" permit, he was stopped and arrested.

After more than a week in jail, Hassan was presented with a wad of papers to ink with a finger, which he was told would allow him to stay in Turkey legally.

Instead, "we were shocked when the next morning they loaded us on buses and sent us back to Syria."

"Turkey claims it helps Syrians voluntarily return to their country, but threatening to lock them up until they agree to return, forcing them to sign forms, and dumping them in a war zone is neither voluntary nor legal," said Gerry Simpson, an associate director at Human Rights Watch.

Most had tried to illegally cross the border, but others were residents sent home for not having the right papers, he said.

More than 4,400 Syrians have been sent back via Bab al-Hawa this month, he said.

At a press conference in Istanbul on Thursday, Syria's exiled opposition said it had received assurances from Turkish authorities that Syrian "families would not be deported to Syria".

But Anas Abdah, the head of the Syrian National Coalition, called on all Syrians in Turkey to settle their status with the authorities.

Inside the arrivals hall in Bab al-Hawa, Luay Mohammed, 23, said he was still in shock after being bussed back in the middle of the night.

"I have no idea how I will start over" in Syria, said the young man, back in his home country for the first time in four years.

After waiting in line, he finally reached his turn at the counter, leaning in to hear the official registering his details on a computer behind the perforated glass.

Muhammed had been detained in Turkey's southern city of Antalya, where he worked in a restaurant, he told AFP.

Around a week ago, he had rushed a friend injured in a fight with locals to the hospital on his motorbike, only to find the police waiting.

"They took us to the police station," he said before they were transferred to a jail containing around 350 foreigners.

"They took us back to Syria in the middle of the night," he said.

Hassan said he would try to travel east to his home city of Manbij. But that too is complicated.

The northern city is now under the control of a military council allied to Syria's Kurds, who are seen by Turkey and its Syrian rebel proxies as "terrorists".

And even if he did find a job, he would be without his family. "My family isn't in Syria, two of my brothers are still in Turkey," he said.