Over 130 cars collide with each other in Texas; at least 5 dead 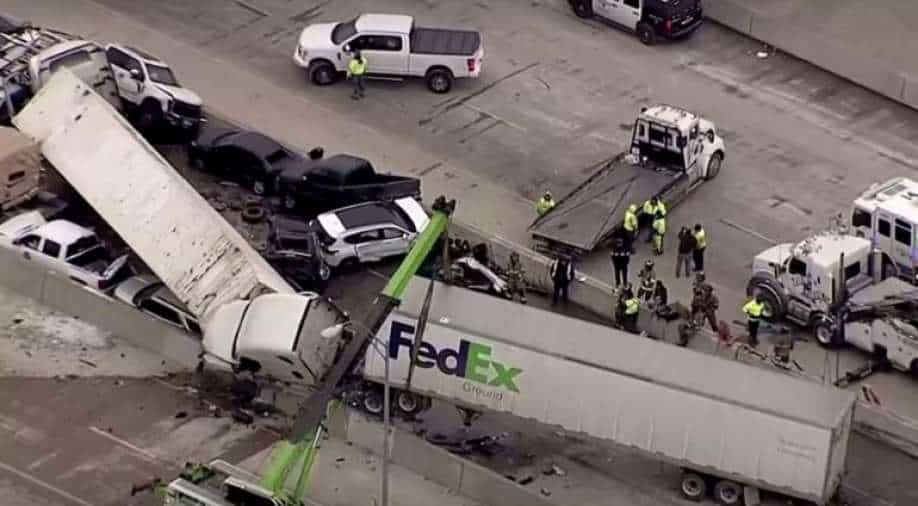 130+ cars collided with each other in Texas; at least 5 dead Photograph:( Reuters )

At least five people lost their lives and dozens wounded on Thursday when some 130 cars crashed in a pileup on a highway in Texas in the United States.

Authorities said the accident took place on a busy interstate road north of downtown Fort Worth when about 130 vehicles collided with each other. \

GRAPHIC VIDEO of the +100 car pileup in #FortWorth Texas this morning. Dozens of people were injured & several killed. This ice storm is expected to impact millions of people in the coming days. Please be careful out there! Video via Cristal Floran Alonzo on FaceBook #TXwx pic.twitter.com/NjMd71mcJo

Preliminary investigation has revealed that ice could be the factor behind the incident.

The toll could increase as the rescue workers are continuing to run a check on the vehicles, the spokesperson added.

Aerial images from the place of the incident showed several damaged large tractor-trailers standing on top of one another.

A number of vehicles were also seen badly crashed in the site, which a local official says stretched to about 0.8 km, reports news agency Reuters.

Jason McLaughlin, a professional storm chaser, put out a video on Twitter he shot which showed several damaged cars and trucks

Jason McLaughlin, a professional storm chaser, posted a video on Twitter he'd filmed at the scene showing dozens of mangled cars and trucks.

"It looks like a couple of vehicles lost control and when that happened, everything just piled up behind them."

The severe winter conditions in the coasts on Thursday have greatly affected driving and the National Weather Service warned of persistent freezing rain and sleet in Texas.