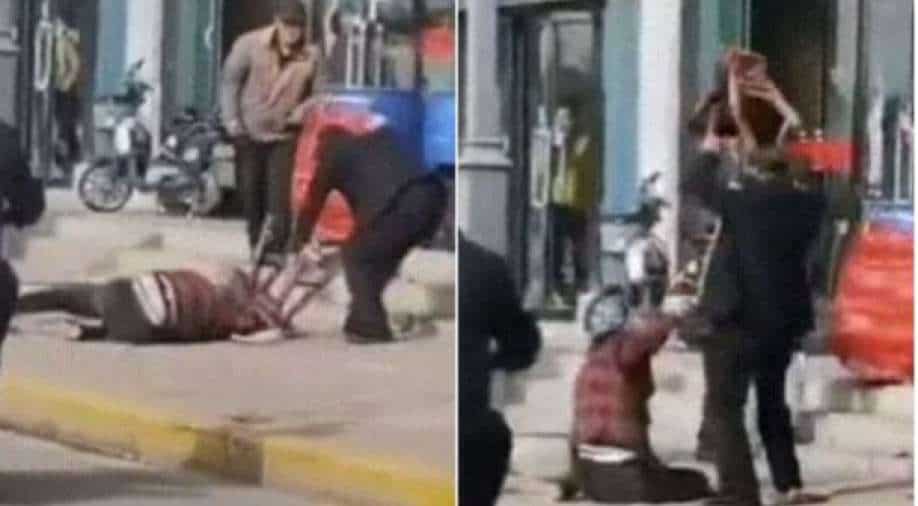 In the footage, onlookers could be seen doing nothing as the man beat his wife on a busy street in broad daylight. Photograph:( Twitter )

Pictures of the assault first appeared on social media and in domestic news outlets on Sunday and have been shared millions of times.

A Chinese man got angered after a traffic quarrel and then killed his wife in broad daylight on October 31st in China’s Shanxi province.

During the morning time, the person who was driving with his wife hit another vehicle. The spouse supposedly confined her husband who attempted to run. However, this act actually outraged her husband.

The video footage and pictures that appear to show the man in beating his wife to death as onlookers stand by and do nothing have sparked outrage and raised new questions about domestic violence.

Pictures of the assault first appeared on social media and in domestic news outlets on Sunday and have been shared millions of times.

Shanxi, yesterday - at least 4 people stand around as this man beats his wife. Nobody steps in to stop this 'marital conflict.' This is how it starts, but it ends up with the woman being stabbed & killed by her husband.

Many people looked on and filmed, yet nobody stopped him. pic.twitter.com/mzYRfJ6e2l

"The suspect is in the custody of public security organs, and the case is being fully investigated," police said.

In the footage, cyclists, motorists and pedestrians, including children, can be seen watching the street side attack.

Media posts about the incident drew tens of thousands of comments, with most criticising the inaction of the bystanders and the lax attitude towards domestic violence in some sectors of Chinese society.

"He's not holding a machine gun, why did no one step forward to control him?" asked one commenter in a widely shared response.

At the time the law was passed, the government-run All-China Women's Federation estimated that about one in four Chinese women experienced violence during their marriage. Authorities register some 40,000 to 50,000 complaints a year.