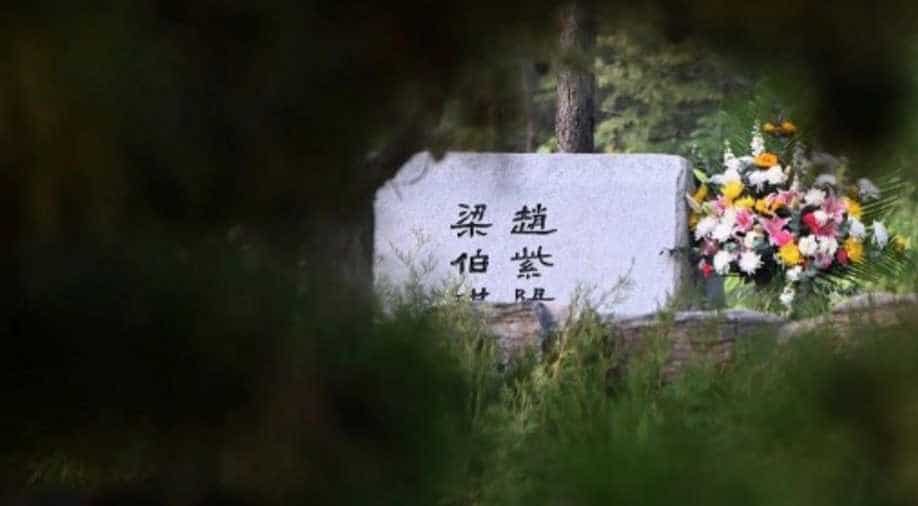 The gravestone of former Chinese Communist Party leader Zhao Ziyang is seen at the Changping cemetery in Beijing. Photograph:( AFP )

Zhao Ziyang, who is a revered figure among Chinese human rights defenders, is still a sensitive topic in the country, where commemorations of his death are held under tight surveillance or prevented altogether.

A former Chinese Communist Party leader ousted after he opposed the use of force to quell 1989 democracy protests was buried over a decade after he died, his family said, in a service ignored by state media.

Zhao Ziyang, who is a revered figure among Chinese human rights defenders, is still a sensitive topic in the country, where commemorations of his death are held under tight surveillance or prevented altogether.

There was no mention of his burial ceremony Friday on state media, and searching for his name on social media returned no results.

"After so many years and our persistence, we truly have found solace," he said, declining to elaborate on why it took so long to arrange the burial of his father-in-law's ashes.

The burial ceremony for Zhao and his wife, Liang Boqi, took place Friday afternoon at a Beijing cemetery on the outskirts of the city.

A day after the burial service, the Changping cemetery, about 60 kilometres north-west of downtown Beijing, was quiet and deserted.

An AFP reporter who visited the site saw two guards in uniform and four other people in civilian clothes watching Zhao's tomb.

Despite the heavy security, three people were seen paying their respects with one bowing three times in front of the simple grey headstone, as per traditional Chinese custom. Flowers had also been placed next to the grave.

Pictures of Zhao and Liang were placed on stands at the site during yesterday's burial, according to photos published by the South China Morning Post and the BBC.

But these photos had been removed a day later. The guards blocked attempts by AFP journalists to take photos or videos at the site.

Zhao was not laid to rest at the Baobashan Cemetery as was customary for revolutionary heroes and Communist Party luminaries.

Attendance at Friday's burial was limited to "just family and relatives," Wang said, estimating that about 20 people or fewer attended the ceremony, though others joined later.

Zhao's opposition to using deadly military force to crack down on democracy protests in Tiananmen Square came at a high cost — the former premier and Communist Party general secretary was sacked and lived under house arrest for 16 years until his death.

Zhao opposed Deng Xiaoping's imposition of martial law in 1989, when hundreds of unarmed civilians — by some estimates, more than 1,000 — were killed on June 4, a move for which he has frequently been criticised.

He has however drawn acclaim for carrying out economic reforms in the 1980s that created opportunities for many people.