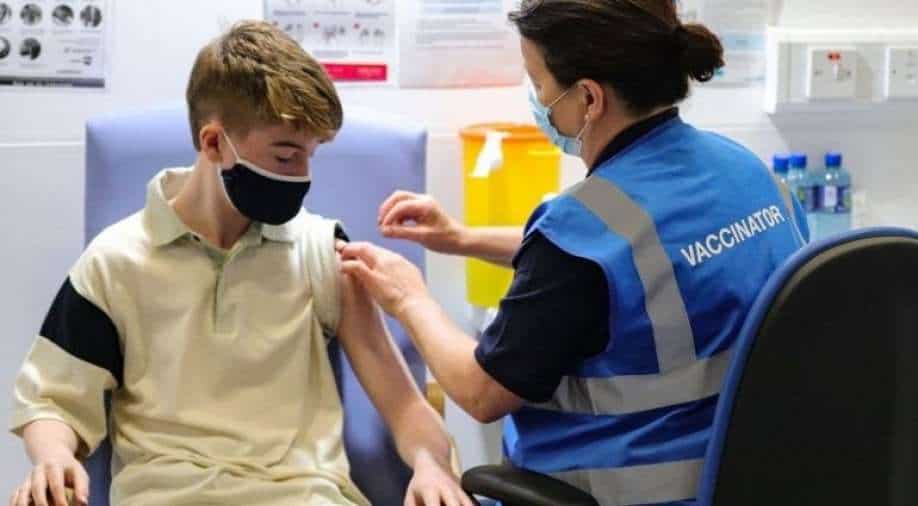 A boy is getting inoculated against the coronavirus disease in a Children's vaccination center in Dublin Photograph:( AFP )

Inoculating children and young people, who can unwittingly transmit COVID-19 to others, is considered a critical step towards taming the pandemic

Several countries in Europe have started the inoculation drive against coronavirus for children with the rapid spread of the Omicron variant.

Inoculating children and young people, who can unwittingly transmit COVID-19 to others, is considered a critical step towards taming the pandemic.

Authorities in Belgium and France have announced that children aged 5-11 are now eligible for voluntary COVID-19 vaccination in both the countries.

“This vaccination will be carried out with a paediatric version of the Pfizer/BioNTech vaccine, which is administered in two doses injected 21 days apart. This vaccine has been approved by the European Medicines Agency,” said Belgium’s Interministerial Conference on Public Health (CIM).

Over 76 per cent people living in Belgium are fully vaccinated. Meanwhile, 72 per cent of the youngest age group, between 12 and 15 years old has been inoculated.

“We have observed that 80 per cent of children with severe forms had no comorbidities,” said the French National Authority for Health (HAS).

Vaccinating children “could diminish the virus’s circulation in schools and reduce the risk of classroom closures,” it added.

France is reporting about 70,000 coronavirus infections a day as it battles a fifth wave of the epidemic.

Germany, Spain, Greece and Hungary have also started the vaccination drive for children as young as five in a bid to keep schools open.

Finland also revealed plans to expand its vaccination programme to children aged between five and 12, a day after announcing bars must close at 9:00 pm on Christmas Eve to fight record Covid infection levels.

Since it emerged in late November, Omicron has been detected in at least 38 of the 53 countries in the WHO's European region and is already dominant in many of them including Denmark, Portugal, and the United Kingdom.

The latest data suggests Omicron does not cause more severe illness than previous variants, including Delta, but scientists warn it could cause more deaths if soaring infection numbers overwhelm health systems.

According to the World Health Organization's regional director of Europe, Hans Kluge, "We can see another storm coming."

"Within weeks, Omicron will dominate in more countries of the region, pushing already stretched health systems further to the brink."

Germany, Scotland, Ireland and the Netherlands are among countries that have reimposed partial or full lockdowns or other social distancing measures.