Oklahoma's Supreme Court gives go ahead to Trump's rally; to proceed as planned

A legal bid to stop the rally due to increasing coronavirus fears was rejected by the court.

Oklahoma's Supreme Court has ruled that US President Donald Trump's rally on Saturday in Tulsa, his first since March, can go ahead.

A legal bid to stop the rally due to increasing coronavirus fears was rejected by the court.

The judgement came just as Trump announced that a curfew in the city had been lifted for the rally.

I just spoke to the highly respected Mayor of Tulsa, G.T. Bynum, who informed me there will be no curfew tonight or tomorrow for our many supporters attending the #MAGA Rally. Enjoy yourselves - thank you to Mayor Bynum! @gtbynum

Virus cases are rising in Oklahoma, and local health officials have expressed concerns over hosting the rally.

The Trump campaign says they received over 1m ticket requests for the event.

The queue for the event at the Bank of Oklahoma Center - which seats 19,000 people - began forming earlier this week. 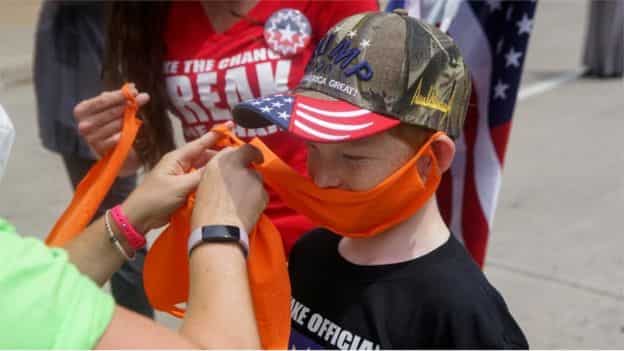 The lawsuit to cancel his rally was filed on behalf of local residents and businesses who had argued the venue should mandate social distancing guidelines in accordance with US public health officials' recommendations, or cancel the event.

But the Supreme Court said that as the state had begun to reopen, the regulations left social distancing decisions up to individual business owners.

In response to safety concerns, the Trump campaign has said they will check attendees' temperatures and offer hand sanitiser and masks.

But people buying tickets for the Tulsa rally online also have to sign a waiver confirming they "voluntarily assume all risks related to exposure to Covid-19" and will not hold the president's campaign responsible for "any illness or injury".

The president himself has pushed back against guidance around masks, calling them a personal choice.