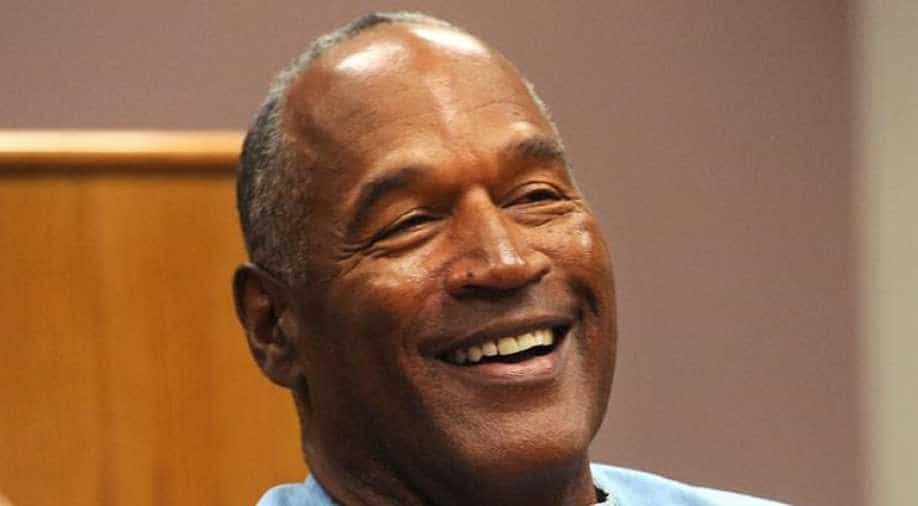 Simpson plans to relocate to Florida following his release from the medium-security prison where he has been serving his sentence, Malcolm LaVergne, his lawyer, said. Photograph:( Reuters )

Simpson was granted parole at a hearing in July and his earliest release date was set for October 1, but he had widely been expected to be freed no earlier than Monday.

Simpson was famously found not guilty in 1995 of the grisly murders of his ex-wife, Nicole Brown Simpson, and a male friend, Ron Goldman, in a case that transfixed America and became known as the 'Trial of the Century'

Simpson plans to relocate to Florida following his release from the medium-security prison where he has been serving his sentence, Malcolm LaVergne, his lawyer, said.

Simpson was famously found not guilty in 1995 of the grisly murders of his ex-wife, Nicole Brown Simpson, and a male friend, Ron Goldman, in a case that transfixed the country and became known as the "Trial of the Century."

But the former National Football League running back and actor was sent to prison in 2008 for his role in an armed robbery the previous year of two sports memorabilia dealers at a Las Vegas resort.

Simpson claimed at his trial that he was just seeking to recover personal items from the dealers, and he repeated that explanation at his parole board hearing in July, where the four-member panel voted unanimously for his release.

At that hearing Simpson initially did not express any remorse for his actions but eventually offered that he was "sorry that things turned out the way they did."

"I had no intent to commit a crime," he said. "If I would have made a better judgment back then, none of this would have never happened."

LaVergne told KTNV-TV that Simpson planned to relocate to Florida, play golf and be around his friends and family.

His lawyer said he did not anticipate that Simpson would pose any problems.

At the hearing, Simpson said he was "at a point in my life where all I want to do is spend time, as much time as I can, with my children and my friends."

"Believe it or not I do have some real friends," he added.

From the NFL to Hollywood
Simpson was convicted in October 2008 of armed robbery, assault, kidnapping and other offenses after he and five associates -- two of whom were armed -- ambushed the two sports memorabilia dealers in a casino hotel room.

He was sentenced to a minimum of nine years in prison and a maximum of 33 years.

Orenthal James "O.J." Simpson shot to fame in the 1970s with the NFL's Buffalo Bills after winning the prestigious Heisman Trophy -- the award for the best player in American collegiate football -- as a running back at the University of Southern California.

He retired from football in 1979 after setting numerous rushing records and went on to become an advertising pitchman and a Hollywood actor ("The Towering Inferno," "The Naked Gun").

In June 1994, Simpson's 35-year-old ex-wife and Goldman were found stabbed to death outside her Los Angeles home.

Simpson was arrested after a low-speed car chase through Los Angeles that was broadcast live by television stations and watched by millions.

He was acquitted in October 1995 after a nine-month trial, a verdict that was greeted with disbelief by many Americans.

Simpson was subsequently found liable for the deaths in a 1997 civil suit and was ordered to pay damages totaling $33.5 million to the families of the victims.

He has been out of the limelight while behind bars, but fascination with his story lives on.

"O.J.: Made in America," a nearly eight-hour documentary about his murder trial, won the best documentary Oscar in February.