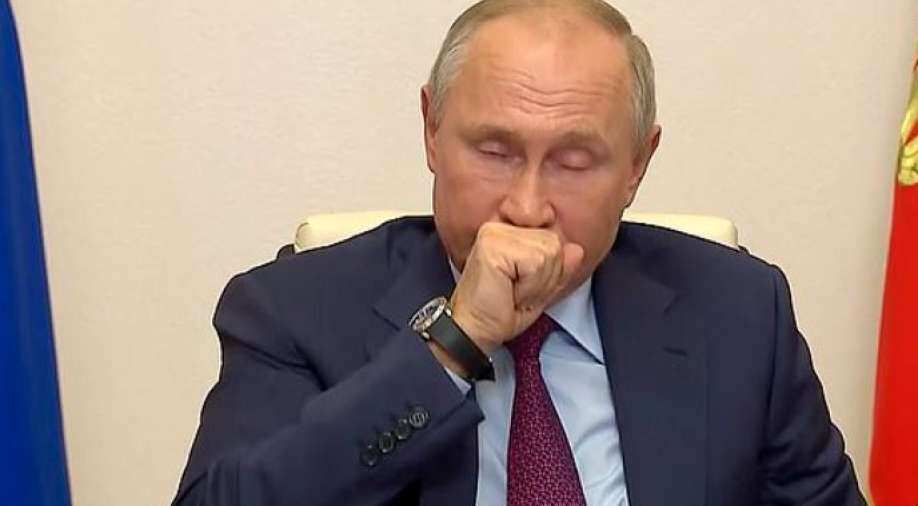 President Putin coughs during a televised conference Photograph:( Others )

Russian President Putin,68, reportedly struggled to finish a sentence as he spoke to officials during the coronavirus conference

As Russia grapples with the coronavirus pandemic, President Putin was seen coughing during a televised meeting as the Kremlin denied any health rumours.

Putin,68, reportedly struggled to finish a sentence as he spoke to officials during the coronavirus conference. However, state news agency TASS said the Russian president was "absolutely normal".

Putin was speaking to finance minister Anton Siluanov during the video call when he began coughing.

The Russian president has been plagued by persistent health rumours, earlier this month a report claimed that Putin may quit his post in January amid fears he has Parkinson's disease.

Putin reportedly has been exhibiting symptoms of Parkinson’s disease. There was footage earlier which purportedly showed Putin's legs moving as he gripped onto the armrest of a chair leading to speculation that he was suffering from Parkinson’s.

Putin had said earlier that he was "alarmed" by Russia's spike in virus deaths while acknowledging that several regions in the country were experiencing medicine shortages and long waiting times for ambulances.

The Russian president had warned regional chiefs that "it is completely unacceptable to pretend that all is fine".

The country continues to battle the virus even as Russia registered the world's first coronavirus vaccine Sputnik V in August. Putin had announced last month that Russia had registered a second coronavirus vaccine, EpiVacCorona. The Russian president has promised to make the vaccine widely available.

Russia has registered over 2 million virus cases and 34,850 virus-related fatalities.