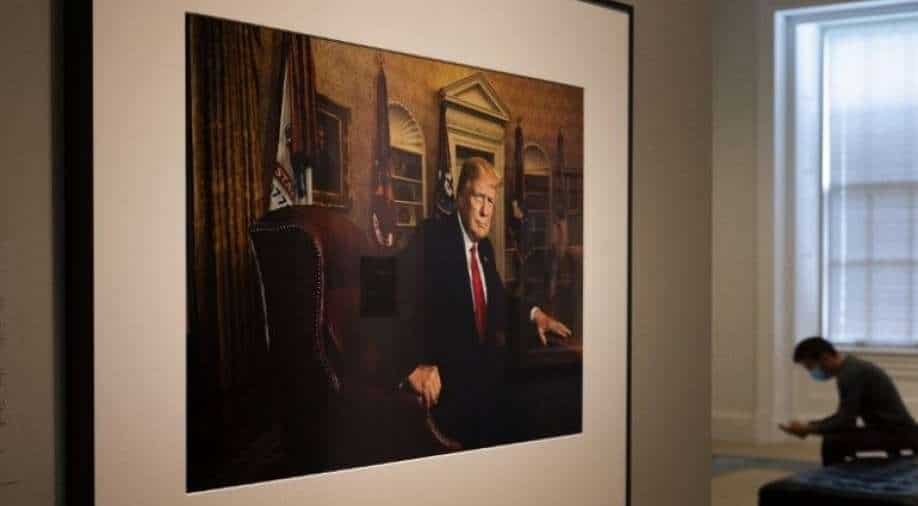 Interestingly, this caption is also written in Spanish, which many feel comes out as an irony considering the controversies of Trump and racism

The former US President Donald Trump has finally appeared on the walls of the famous National Portrait Gallery but this time the former reality TV star has not been able to control the words behind it.

Trump's picture, hanging on the walls of the gallery, was clicked by New York-based Pari Dukovic for Time magazine on 17 June 2019, which was a day before the then-president had announced his plans of seeking re-election.

In the picture, Trump can be seen sitting, holding on to the Resolute Desk in the Oval Office, and can be seen sporting his famous red tie with a suit.

The picture goes along with a caption that highlights that Trump ran for the White House and was elected "after tapping into populist American sentiment". It also reads that the Republican leader "put forth an 'America first' agenda".

However, as expected, the caption has not missed the controversies that surrounded the 74-year-old leader. Trump was the first president of the US to be impeached twice, which is also mentioned in the caption, and it also points out that the coronavirus pandemic "became a key issue during his re-election campaign".

Continuing the point of re-election, the caption adds, "Trump did not concede [defeat], and a mob of his supporters, who refused to accept the results, attacked the US Capitol complex on 6 January 2021, when Congress was working to certify [Joe] Biden’s win."

Interestingly, this caption is also written in Spanish, which many feel comes out as an irony considering the controversies of Trump and racism.

His portrait, interestingly, hangs on the back wall of the famous Hope poster of the first Black President of the US, Barack Obama, created by Shepard Fairey. He is also facing the painting of a civil rights hero, John Lewis, who famously chose to boycott Trump’s inauguration.

Many visitors purposely chose to ignore getting clicked with the former president who "looks like an insecure man holding the desk to believe in himself," the Guardian quoted a visitor. Some visitors also believe the gallery made him look good and not "orange".