North Korea's US envoy arrives in Hanoi ahead of Trump-Kim summit: Report 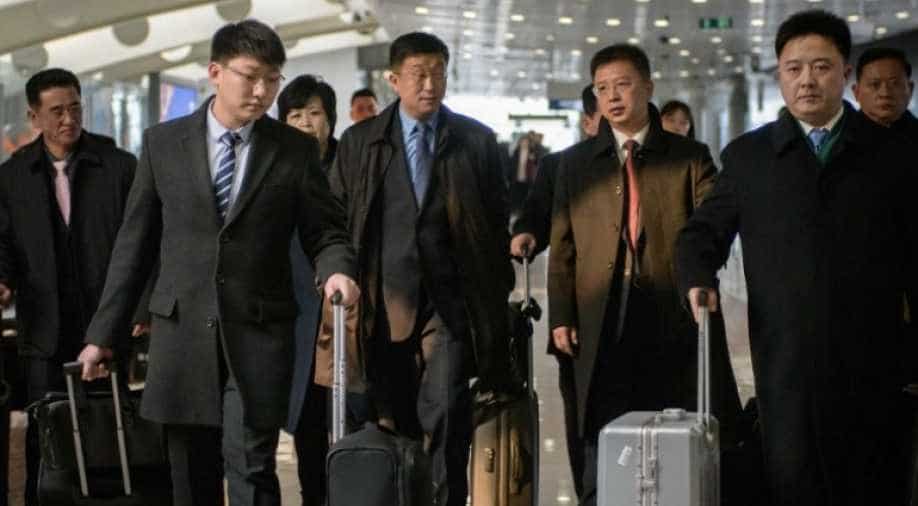 Kim Hyok Chol was seen by an AFP reporter walking into a government guesthouse where other North Korean officials in town for pre-summit preparations were staying over the weekend.

Pyongyang's special representative for the US arrived in Hanoi on Wednesday with a North Korean delegation, an AFP reporter and source confirmed, ahead of a summit between Donald Trump and Kim Jong Un next week.

Kim Hyok Chol was seen by an AFP reporter walking into a government guesthouse where other North Korean officials in town for pre-summit preparations were staying over the weekend.

He arrived from Beijing, where he spent a night en route from North Korea.

"A team of North Koreans arrived on a flight from Beijing," a source at the airport told AFP, requesting anonymity.

Kim Hyok Chol is expected to meet with his US counterpart Stephen Biegun, who is heading to Hanoi, later in the week to lay the groundwork for talks between Trump and Kim in the Vietnamese capital on February 27-28.

Biegen and Kim Hyok Chol met in Pyongyang earlier this month to hammer out US and North Korean positions on denuclearisation ahead of the much-anticipated meeting.

The summit will be the second face-to-face for Kim and Trump after a summit in Singapore in June that produced a vaguely worded agreement on denuclearisation.

Progress has since stalled, with the two sides disagreeing over what exactly denuclearisation means.

Observers are hoping for more concrete outcomes from the Hanoi summit to avoid it being dismissed as a publicity stunt.

Trump said on Tuesday that while he hoped his next meeting with Kim Jong Un would yield progress, he was also in "no rush" for results.

"I'd like to see ultimately denuclearisation of North Korea," Trump told reporters.

Vietnam is feverishly preparing for the high-profile event, Trump's second visit to the country and the first for a North Korean leader since Kim's grandfather Kim Il Sung travelled to the communist country in 1964.

Speculation is swirling that Kim could travel to Vietnam overland via China by train after a North Korean and a Vietnamese team were seen separately surveying roads and rail tracks near the China border with Vietnam.

Kim travelled by air to the summit in Singapore on a plane lent to him by Beijing, but normally travels by armoured train when he visits China.

Officials have remained tight-lipped on summit details, including the agenda and precise venue, though several teams from both sides are already in Hanoi ahead of the meeting.

Kim Jong Un's de-facto chief of staff Kim Chang Son, dubbed his 'butler', was in Hanoi over the weekend to discuss protocol and security matters with the US team.

He was seen at the government guesthouse and the colonial-era, French-built Metropole hotel, both slated as possible venues for the summit, though officials have so far refused to confirm the precise meeting location.

Alex Wong, US deputy assistant secretary of state for North Korea, arrived in the Vietnamese capital preparing for the summit earlier this week, while Biegen could arrive Thursday.

A State Department deputy spokesman said the US objectives have not changed since the Singapore summit.

"Chairman Kim's commitment to denuclearisation upon which the world is focused right now and... that remains our goal," Robert Palladino told reporters.