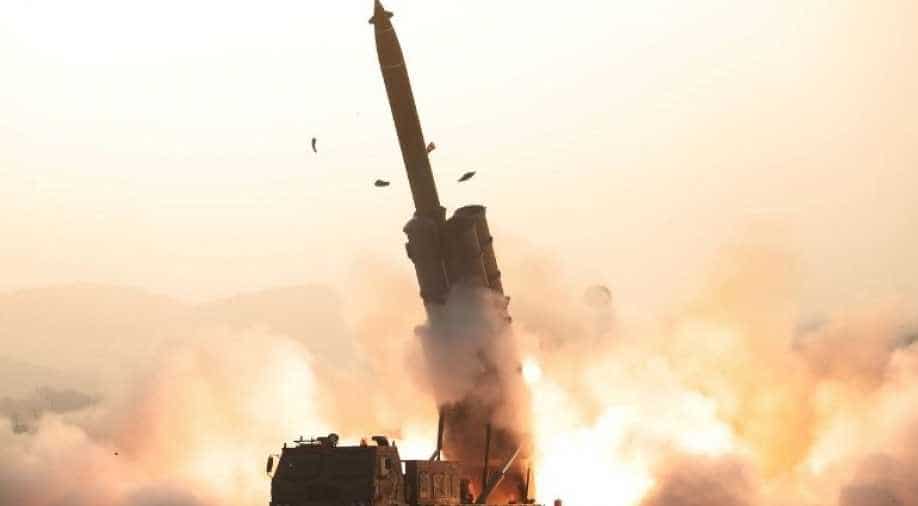 The apparent launching of projectiles that, according to military officials in Japan and South Korea, landed in the sea between the Korean Peninsula and Japan, is seen in this undated picture released by North Korea's Central News Agency Photograph:( Reuters )

The success of the tests was reported immediately and Kim expressed satisfaction and congratulated the scientists.

North Korean state news agency KCNA said on Friday another test of super-large multiple rocket launchers a day earlier had been a success, but the test drew protests from neighbouring Japan and South Korea.

KCNA said the latest test of the "super-large multiple rocket launchers", following two tests of the same weapon in August and September overseen by North Korean leader Kim Jong Un, indicated the progress of Pyongyang's weapons development while talks with the United States remain in limbo.

The success of the tests was reported immediately and Kim expressed satisfaction and congratulated the scientists who had developed the weapon, KCNA said, suggesting that Kim was not at the site for Thursday afternoon's test.

Thursday's test verified that the "continuous fire system" of the multiple rocket launchers was able to "totally destroy" a group target of the enemy by a surprise strike, KCNA said.

Japanese Chief Cabinet Secretary Yoshihide Suga said North Korea's latest test, which he described as a missile launch, was against United Nations resolutions and was "extremely regrettable". Suga said Japan had protested to North Korea over the missile launch.

"This launch and continued North Korean aggression underscore the need for the Trump Administration to re-commit to the maximum pressure policy" and for Congress to impose additional sanctions against Kim's government, Gardner said in a statement.

"We're also test-firing missiles, no less than North Korea does," he told a parliamentary session. "Our missile defence and intercept capabilities are absolutely superior to theirs."

The weapons test was the first since one day of talks between the United States and North Korea in Sweden ended without an agreement on Oct. 5. It came as North Korea repeatedly emphasises an end-of-the-year deadline that Kim set for denuclearisation talks with Washington.

The situation on the Korean Peninsula is at a critical stage, Chinese Foreign Ministry spokesman Geng Shuang told reporters at a daily news briefing on Friday. All sides should work towards a peaceful resolution of the issue, he said.

KCNA said last month that while Kim and US President Donald Trump have a "special" relationship, policymakers in Washington were "hostile to the DPRK for no reason". North Korea's official name is the Democratic People's Republic of Korea.