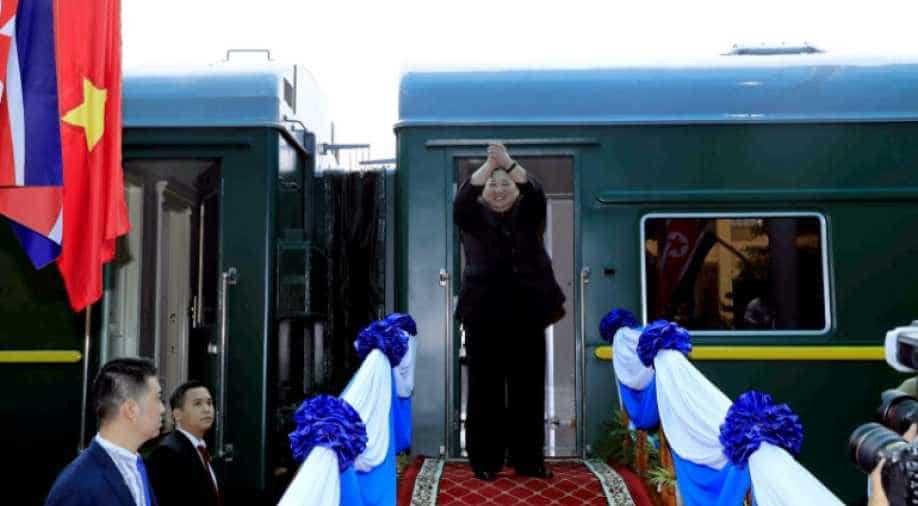 Kim Jong Un gestures to spectators as he boards a train to begin a two-day journey back to North Korea. Photograph:( Agencia EFE )

Before leaving for his country, he had visited the mausoleum of Vietnamese national hero Ho Chi Minh, with whom his grandfather Kim Il-Sung met in Hanoi in 1964, which had marked the last official visit by a North Korean leader to Vietnam.

The leader of North Korea left the Vietnamese capital on Saturday for Pyongyang by train, after concluding a two-day state visit, following his failed summit with the President of the United States earlier in the week.

Before leaving for his country, he had visited the mausoleum of Vietnamese national hero Ho Chi Minh, with whom his grandfather Kim Il-Sung met in Hanoi in 1964, which had marked the last official visit by a North Korean leader to Vietnam.

After the shortstop, he travelled by car the 170 kilometres (106 miles) that separate Hanoi from Dong Dang station on the border with China.

He arrived at the station after 12.30 pm and boarded a high-security train to return to his country.

A crowd waving Vietnamese and North Korean flags to the beats of the national orchestra had gathered at the gates of the railway station to bid farewell to the leader of North Korea.

Kim waved to the gathered crowd with a broad smile and boarded the train, flanked by his security personnel.

On Friday, Hanoi had hosted a grand dinner for Kim, that was attended by top officials of the country.

Earlier in the day, he had met Vietnamese President Nguyen Phu Trong.

During the meeting, both leaders had pledged to reinforce ties between the two countries that share historical and ideological affinities owing to the communist root of their regimes.

In recent months, North Korea has shown an interest in the economic transition undertaken by Vietnam since the mid-1980s.

Vietnam had successfully moved from orthodox communism to a state-protected market economy without the Communist Party losing its political hegemony.

Kim had arrived in Hanoi on Tuesday to participate in his second summit with US President Donald Trump, which ended ahead of schedule on Thursday after the two sides failed to agree on the denuclearization of North Korea and the lifting of sanctions.

The two countries had presented different versions of the meet, after it concluded, leading to confusion over its outcome.

However, on Friday, the negotiating teams of both the countries underlined the progress achieved during the talks and made an appeal to continue with the talks and hoped to reach an agreement at a forthcoming summit.

Meanwhile, Kim will be travelling 60 hours to cover 4,500 kilometres that separate the Vietnamese border from the North Korean capital.