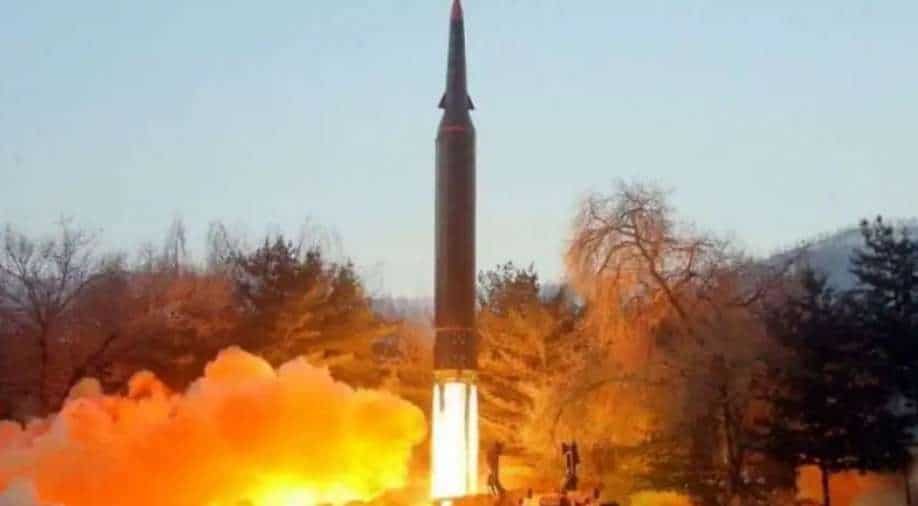 This is a file photo of a view of what state news agency KCNA reports is the test-firing of a hypersonic missile at an undisclosed location in North Korea, January 5, 2022, in this photo released January 6, 2022. Photograph:( Reuters )

South Korea's military reported that North Korea has fired another projectile into the ocean off the east coast of the Korean Peninsula—the fourth test this month—from an airport in its capital city of Pyongyang on Monday (January 17).

Besides South Korea, Japan's government also reported the launch as chief cabinet secretary Hirokazu Matsuno condemned the recent launches. He said that the region's peace and security are at risk.

The projectile is believed to be two short-range ballistic missiles.

After the test, the Japanese Prime Minister's office said in a tweet that North Korea launched a missile and take all possible measures for precaution, including readiness for contingencies.

Instructions by the Prime Minister in Response to the Missile Launch by North Korea (08:54)

1. Dedicate maximum effort to gather and analyze information, and provide the public speedy and adequate information.
2. Ensure the safety of aircraft, vessels, and other assets.

North Korea had used the airport to test fire the Hwasong-12 intermediate-range ballistic missile (IRBM) in 2017, the report added.

Recent missile test launches by North Korea have been condemned by the West, especially the United States. President Joe Biden's administration imposed its first new sanctions on Pyongyang on Wednesday.

North Korea has conducted three other missile tests in less than two weeks. Two of those involved single "hypersonic missiles" capable of high speeds and manoeuvring after launch.

ALSO READ | Who is Aafia Siddiqui, the Pak prisoner at the centre of Texas hostage situation?

On January 14, it conducted a third test - reportedly a pair of short-range ballistic missiles (SRBMs) fired from train cars.

North Korea has defended the missile tests as its sovereign right to self-defence and accused the United States of intentionally escalating the situation with new sanctions.