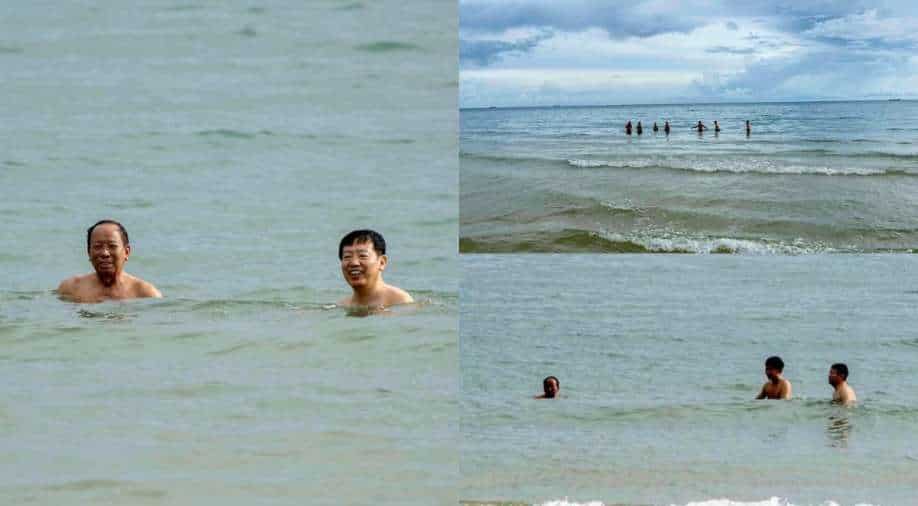 The two leaders have reached Sihanoukville to attend the opening ceremony of the construction of the Slipway Harbor, Drydock Ship Repair Workshop and Rehabilitation Centre at Ream Marine Base Modernisation Center, said 'Khmer Times' report

Even as Cambodia and China have been denying the upcoming secret naval base at Ream on the Gulf of Thailand, the extreme closeness seems to have been quite visible. Tea Banh, Deputy Prime Minister and Minister of National Defence, Cambodia and Wang Wentian, Chinese ambassador to Phnom Penh seem to have enjoyed a friendly dip together off the coast of Sihanoukville on Tuesday, said a report. The two leaders have reached Sihanoukville to attend the opening ceremony of the construction of the Slipway Harbor, Drydock Ship Repair Workshop and Rehabilitation Centre at Ream Marine Base Modernisation Center, said 'Khmer Times' report.

#Cambodia defence minister Tea Banh shares photos of him swimming with Chinese ambassador Wang Wentian this afternoon at a Sihanoukville beach - amid reports expecting a Sino-Cambodian event at Ream Naval Base this week to potentially highlight China’s roles at the facility. pic.twitter.com/eVZkXl80q6

“This afternoon, on the occasion of my visit to Sihanoukville, I and His Excellency Wang Wentian, Chinese Ambassador to Cambodia… dived into the sea to strengthen closer brotherhood and cooperation,” Banh said.

This comes as Australian prime minister has voiced concern over the report about the secret naval base. Labelling the report as “concerning”, PM Anthony Albanese had raised questions about the project and called for transparency. “We encourage Beijing to be transparent about its intent and to ensure that its activities support regional security and stability,” Albanese said. Cambodia has also apprised Australia that no foreign military will be given ‘exclusive’ access to the Ream base, he added.

Watch | Gravitas: China is building a secret military base in Cambodia

In a call with Australian foreign minister Penny Wong, Cambodia’s deputy prime minister Prak Sokhonn has rejected the news report as “groundless accusations”, as per a statement released on Tuesday by Phnom Penh.