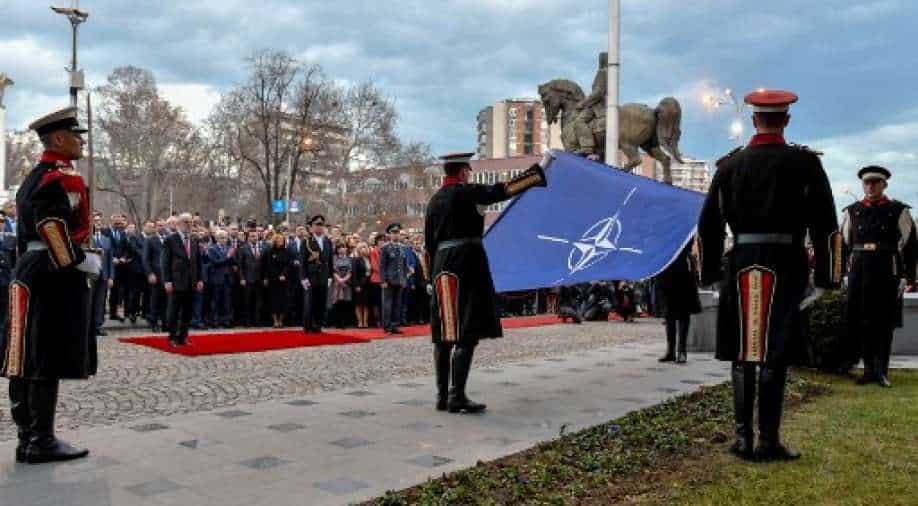 Members of the guard of honor raise the NATO flag during a ceremony in Skopje Photograph:( AFP )

Russia announced that NATO's staff in the capital would be stripped of their accreditation from November 1.

Russia on Monday decided to close NATO's offices in Moscow after the European military alliance had expelled members of Moscow's delegation for alleged spying.

Russia's foreign minister Lavrov said: "Following certain measures taken by NATO, the basic conditions for common work no longer exist," while informing that the country would be suspending work of its official mission to NATO in Brussels.

Russia announced that NATO's staff in the capital would be stripped of their accreditation from November 1. NATO's information office will also be closed.

"NATO has already greatly reduced its contacts with our mission," Lavrov said. The move comes after NATO declared it had expelled eight members of the country's NATO mission as they allegedly were "undeclared Russian intelligence officers."

Also Read: Russia accuses US of trying to violate its territorial waters

Lavrov said NATO wasn't "interested in equitable dialogue and joint work" as ties between the Western nations and Russia touched a new low.

"We see no reason to pretend that any change is possible in the foreseeable future," Lavrov said.