'No one left but you': 5-month-old Gaza baby pulled from dead mother's arms 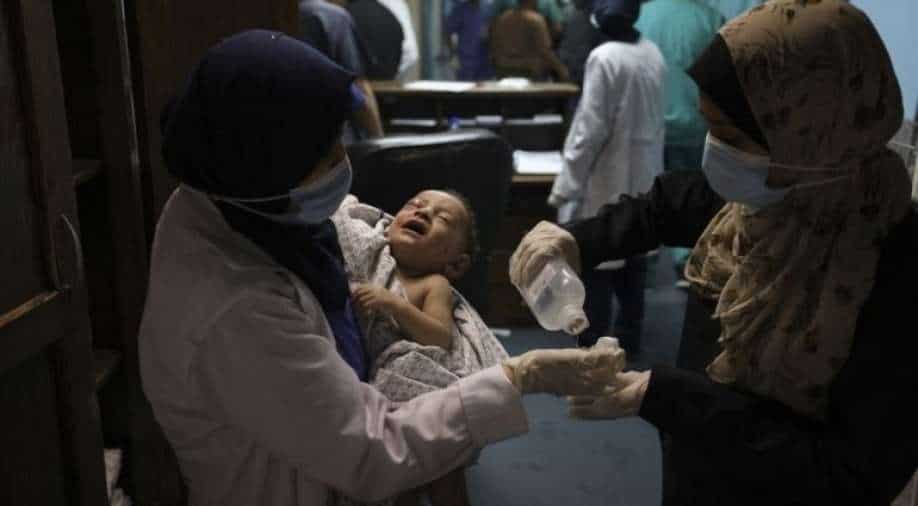 A nurse holds a Omar al-Hadidi, who was pulled alive from under the rubble while seven other family members perished, at Al-Shifa Hospital, after an Israeli air strike struck al-Shati Refugee Camp without advance warning during the night, in Gaza City early on May 15, 2021. Photograph:(AFP)
Follow Us

After the strikes, rescue workers pulled the five-month-old from the arms of his dead mother early Saturday, one of his tiny legs fractured in three places.

Inside a Gaza hospital, Mohammad al-Hadidi cradled his baby boy Omar -- his only surviving child after Israeli airstrikes killed his wife and four other sons in the night.
"I have no one left in the world but you," the 37-year-old father said.

After the strikes, rescue workers pulled the five-month-old from the arms of his dead mother early Saturday, one of his tiny legs fractured in three places.

"They've gone to find God, we don't want to stay around here for much longer," the bereaved father said, sobbing.

Sitting on the edge of a hospital bed, Hadidi carefully kissed his child's cheek.

In his arms, Omar rested peacefully, his right leg poking out of his romper in a plaster cast.

Under a crown of tiny brown curls, his eyelids were bruised dark and swollen, and his face covered in scratches.

'Begged to stay the night'

Saturday's strikes hit after Eid al-Fitr, usually a time of joy when Muslim families gather to mark the end of the holy fasting month of Ramadan.

On Friday, Omar's mother had taken him and his brothers to visit their cousins nearby in the Shati refugee camp outside Gaza City where they all lived.

"The kids put on their Eid clothes, took their toys and headed off to their uncle's house to celebrate," Hadidi said.

"They called in the evening to beg to stay the night and I said OK."

Hadidi then paused to gather himself as he recalled what would become a fateful night.

I slept "at home alone... (and) woke up suddenly to the sound of bombing," he said.

Soon a neighbour called to say an Israeli missile had hit his brother-in-law's home.

"I hurried over as fast as I could, but when I got there the home was rubble, and rescue workers were pulling out bodies."

His sister-in-law and four of her children were also among the dead.

A video widely shared on social media shows Hadidi clutching his son to his chest, overwhelmed that he had survived.

'God was preparing us'

"All my other sons breastfed, except for Omar who refused from day one," he said wistfully.

"God was preparing us and we had no idea."

Israeli air raids have killed 200 people including 59 children in the besieged coastal enclave since last Monday.

On the Israeli side, the rockets of Palestinian armed groups have killed 10 people.

"What have they done to deserve being bombed without any warning to evacuate the home?"

Israel claims it is targeting armed militants, including the Islamist Hamas group running the Gaza Strip.

But human rights groups have repeatedly condemned strikes that have killed women and children in the overcrowded territory of some 2 million inhabitants.

The Gaza-based Mezan Centre for Human Rights says 341 residential units have been damaged in the aerial bombardment.

Even with airstrikes ongoing, Hadidi said he was waiting for his baby to be declared well enough for him to take him home.

"I will care for him and bring him up on my own," he said.