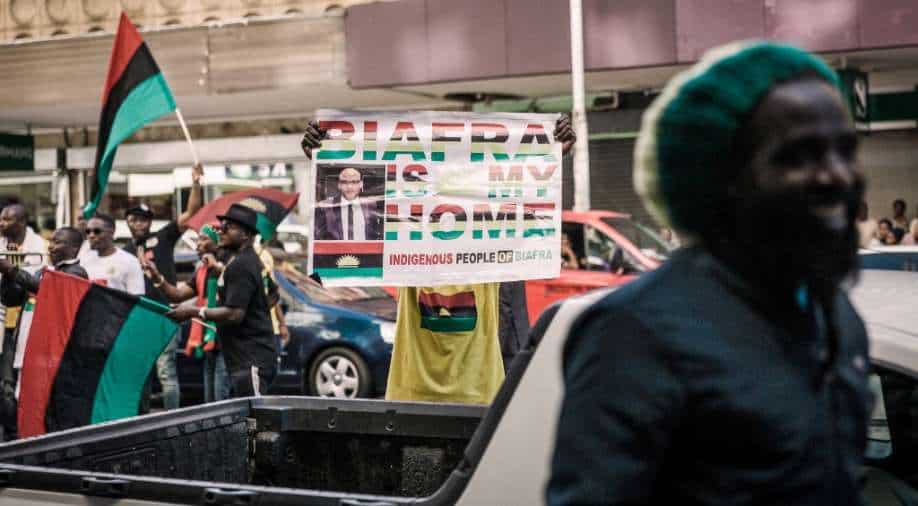 A protestor holds a placard as he takes part in a demonstration in Durban, South Africa, on May 30, 2019 during a Freedom March for Biafra held worldwide and organised by the Indigenous People of Biafra (IPOB). (File Photo)  Photograph:( AFP )

In order to protest the arrest of their leader Nnamdi Kanu, who is facing terror and treasonous felony charges, Indigenous People of Biafra has recently called for businesses to close every Monday

Separatists in Nigeria on Saturday announced a suspension of a weekly protest over the arrest of their leader, a spokesman for the group said in a statement.

The outlawed Indigenous People of Biafra (IPOB), which wants a separate state for the ethnic Igbo people in the southeast of the country, had recently called on businesses in the oil-rich region to close every Monday.

The "sit-at-home" order from 6:00 am to 6:00 pm was to protest the arrest of their leader Nnamdi Kanu who is facing trial on terrorism and treasonable felony charges among others.

Markets and shops heeded the group's call on Monday this week and the streets were mostly deserted, residents said.

But IPOB spokesman Emma Powerful said they were suspending the protest until Kanu's court appearance was scheduled for October 21.

"The suspension of the sit-at-home... was as a result of a direct order from the supreme leader of this great movement (Mazi) Nnamdi Kanu through his lawyers," Powerful said in a statement.

"Our sit-at-home will in the meantime be observed on the date of our leader's court appearances."

He said "the leadership will not hesitate to lift the suspension" if there were "any reason or directive from the IPOB highest command."

Kanu, 53, is being held by the Department of State Services after his lawyers say he was arrested in Kenya in June and brought back to Nigeria to face trial.

Nigerian officials have given no details about where he was detained.

Calls for a separate state of Biafra are a sensitive subject in Nigeria after a unilateral declaration of independence in 1967 sparked a brutal 30-month civil war.

More than one million people died, most of them Igbos, from the impact of conflict, hunger and disease.

The region has seen a spike in violence this year, with attacks on about 20 police stations that authorities blamed on IPOB and its armed wing the Eastern Security Network.

Kanu's arrest was just one action taken by President Muhammadu Buhari's government against separatist agitators in Africa's most populous nation.

Another separatist, Sunday Igboho, who advocates for independence for the southwestern Yoruba people, was arrested last month at the airport in neighbouring Benin, police and airport sources said.

Igboho, who faces extradition back to Nigeria, had been on the run after a gun battle with security forces that killed two of his men, and after weapons and ammunition were discovered at his home.