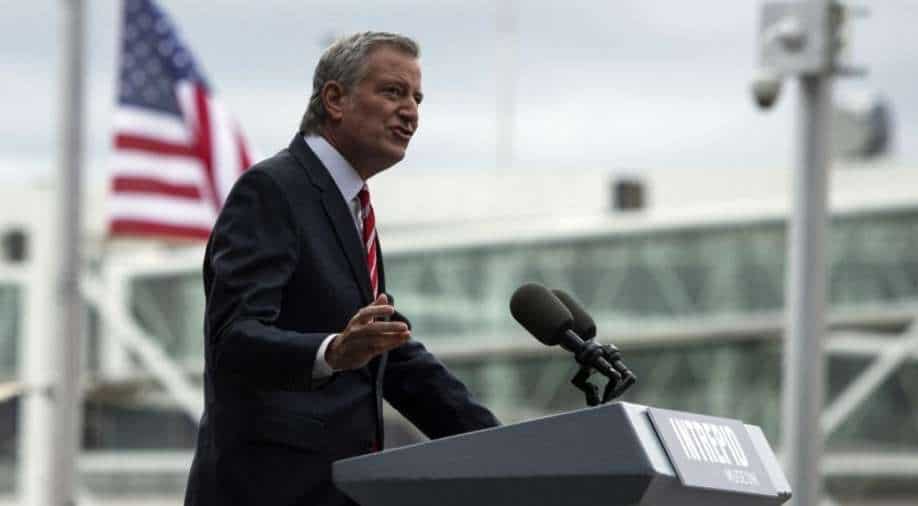 De Blasio has since repeatedly extended the emergency order, even as the pandemic subsided, the city reopened and the governor ended the state of emergency last month.

The order allowed city agencies to issue hundreds of contracts to obtain personal protective equipment amid a global shortage, and to help pay for the city’s contact-tracing efforts, as well as to finance tangential costs — all without the oversight of the city comptroller, who is typically required to approve such contracts.

De Blasio has since repeatedly extended the emergency order, even as the pandemic subsided, the city reopened and the governor ended the state of emergency last month.

On Tuesday, Scott Stringer, the city comptroller, filed a lawsuit against the city and de Blasio to restore the city’s procurement rules, claiming that the city had spent more than $6.9 billion in taxpayer money without proper supervision, leading at times to “widespread procurement failures, including overpayment and overpurchasing.”

“Millions of dollars have been spent on supplies that never materialized, ventilators that were never delivered, $8 million for N-95 masks that weren’t actually N-95 masks,” Stringer said during a news conference, adding that it was time to reestablish the “transparency and accountability that New Yorkers deserve.”

The lawsuit comes as city and state spending of taxpayer money has come under increased scrutiny in the outbreak’s aftermath. The suspension of normal bidding rules helped New York officials in their scramble to secure sought-after supplies, but it also created instances of freewheeling spending with lackluster results and questionable contracts with vendors who had spotty track records, or no experience at all.

Indeed, months after rushing into $1.1 billion in deals for medical supplies and equipments, state officials have tried to claw back millions paid to contractors that they said failed to deliver on time.

State officials, for example, awarded one of the largest coronavirus-related contracts — an $86 million deal for 1,450 ventilators — to an engineer who had never sold a single ventilator; the ventilators never materialized and the state was forced to cancel the contract. Last year, the city built a makeshift hospital at the USTA Billie Jean King National Tennis Center at a cost of more than $52 million. It only served 79 patients.

Stringer’s lawsuit, filed in state Supreme Court in Manhattan, argues that the city’s emergency procurement process is no longer justified because hospitals are no longer overwhelmed and the supply chain issues that vexed the nation last year have been “largely resolved.”

De Blasio’s decision to extend the order more than 100 times since it was issued March 17, 2020, the lawsuit said, “is arbitrary and capricious, an abuse of discretion, and is made in violation of lawful procedure.”

“The action of this executive order is a fragrant violation of the charter and an insult to the fundamentals of good government,” Stringer said Tuesday. “That is why we’re going to court.”

The city comptroller acts as the city’s financial watchdog, tasked with rooting out waste and fraud, and providing oversight and maintaining a record of taxpayer-funded contracts.

The news conference was one of Stringer’s first public appearances since his unsuccessful bid for mayor in the Democratic primary, where he is expected to finish in fifth place. Stringer ran on progressive policies and his record as comptroller, a role in which he has repeatedly challenged de Blasio through lawsuits and agency audits. (“We can’t let the mayor’s hubris outlast the pandemic or even his mayoralty,” Stringer said Tuesday.)

Bill Neidhardt, a spokesperson for de Blasio, fired back, saying that Stringer was “clearly trying to use this lawsuit to keep himself in the headlines after his failed mayoral bid.”

“During the greatest challenge our city has ever faced, emergency procurements have saved lives, period,” Neidhardt said in a statement Tuesday.

Under normal circumstances, city agencies are required to engage in a competitive, and sometimes lengthy, process to award contracts to vendors, typically to the lowest bidder. City regulations allow for an emergency procurement process, which must be approved by the comptroller, to expedite the purchase of goods and services during an emergency.

Stringer’s lawsuit, however, argues that de Blasio bypassed that emergency procurement process, putting a city oversight agency — the Mayor’s Office of Contract Services — in charge of reviewing coronavirus-related contracts that Stringer argues were not properly scrutinized. The agency, the lawsuit said, has failed to provide the comptroller a clear accounting of all the emergency contracts it has registered.

The suit claims that approximately 75% of emergency contracts were awarded to first-time vendors, and that the city has canceled $525 million in contracts as it seeks to recoup millions of dollars from vendors that failed to deliver.

The lawsuit cited a few examples that the comptroller’s office found egregious, including a $10 million contract in September for air conditioning units that would not be used until this summer.

The city also paid $8 million to a New Jersey electronics dealer for 2 million N-95 masks it never received, according to the lawsuit. In another case, which was reported by The New York Times, the suit says the city failed to properly vet a vendor that ultimately failed to deliver 130 ventilators, forcing the city to engage in costly litigation to recover most of the $8.3 million it had already paid out.

In response, the mayor’s office released documents showing that Stringer’s office approved a waiver on March 30, 2020, to prepay the vendor for the ventilators; the waiver said that it was in the city’s interest “to take the measured risk” of prepaying the vendor for “critically-needed equipment.”

Officials from the comptroller’s office argued that the waiver did not equate to approving the contract.