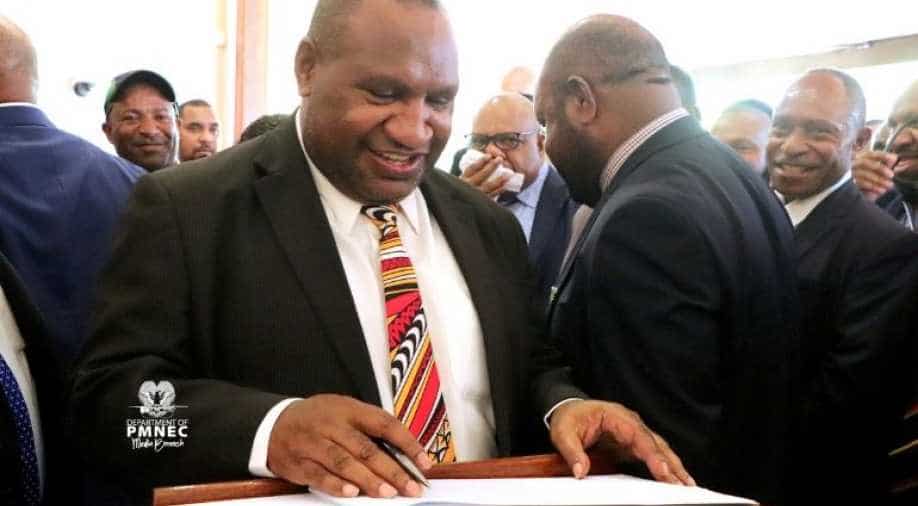 The former finance minister later explained he was preparing notes for a speech, should numbers fall his way.

When Papua New Guinea's lawmakers started to shift their weight in their parliamentary seats in preparation for a tense vote on a new prime minister on Thursday, James Marape looked uninterested, his head lowered, fingers tapping his phone.

The former finance minister later explained he was preparing notes for a speech, should numbers fall his way.

They did, and the notes turned into a powerful series of addresses which signalled a desire to reset how the archipelago conducts business and diplomacy amid a strategic battle between China and the United States for influence in the Pacific.

"We are still struggling to economically free ourselves," Marape told reporters moments after he was sworn in.

"The nation needs to know that this is a break free ... and the emergence of a new group of like-minded leaders," he said referring to himself and his supporters.

Marape became prime minister after receiving 101 votes to eight in parliament, a day after former leader Peter O'Neill resigned having lost the support of the house following almost eight years in power.

The new leader told the chamber he wanted to make his country the richest black Christian nation on earth, then headed to Royal Port Moresby golf club for his regular Thursday round, according to the club's pro, Nelson Gabriel.

Formerly administered by US-ally Australia, PNG has in recent years turned increasingly to China for financing as Beijing becomes a bigger player in the region, something Marape is being asked by colleagues to change.

"I would request that we take a long hard look at all Chinese arrangements," one MP who shifted from opposition to support Marape's leadership bid told Reuters, requesting anonymity because he was not authorised to speak publicly on the issue.

PNG is rich in mineral resources and is close to both US military bases on the island of Guam and to Australia.

China forged a particularly strong relationship with O'Neill, who was the first Pacific leader to sign up to China's Belt and Road infrastructure-building programme and who met President Xi Jinping more than a dozen times during his time in power, the former leader's spokesman told Reuters.

In dollar terms, PNG has the biggest debt to China among its neighbours, representing about one-quarter of its total external debt.

Foreign diplomats are now scrambling to understand the new leader, and there is a belief among some PNG lawmakers and western diplomats that China has the most to lose by the change in leadership.

"We are trying to get some face time with him," a senior British diplomatic source told Reuters.

"I suspect China is too and will be looking to pitch him with promises, but Marape has protectionist sentiments. Chinese loans often come with requirements to use Chinese labour and companies - if Marape isn't willing to accept those terms, it could be an opportunity for the West."

A senior US government source said Marape's family has connections with the United States because his eldest son is enrolled at a North American university.

"Marape has always been a supporter of Western principles such as democracy," the US source said.

"As finance minister, he warned about unsustainable debt levels. We are comforted and buoyed by these statements."

China's embassy in Port Moresby did not respond to requests for comment. Analysts say Marape's former job as finance minister will make him a familiar and friendly face to Chinese diplomats.

"We will engage with the Chinese government and its people (and) so long as it is fair and friendly to us and in our terms, we're happy with that," Marape told Australian Broadcasting Corporation television.

SON OF A PREACHER

He supported a 2009 landowner agreement that paved the way for Exxon's $19 billion PNG LNG project, according to local media reports at the time, but soon became a critic of the oil and gas giant after the anticipated tax-take came in lower than forecast.

On Thursday, he put some of the world's biggest resources companies including France's Total on notice over a perceived lack of wealth flowing from their projects back to communities.

Total's Chairman and CEO, Patrick Pouyanne, told journalists in Paris on Wednesday that O'Neill had defended the interest of his country during the negotiations.

While Marape has indicated he wants to diversify the country's interests and develop its tourism industry, he is not against resources development.

In his highlands electoral base, he has led disarmament initiatives to strip "gun-toting cowboys" of their weapons, who he has blamed for trying to interrupt gas operations.

Parliamentary colleagues are expecting him to shake things up.

"It is time for a transition, it is time for a new generation ... to move on and bring some of the change that our people have been crying for," Charles Abel, who served as O'Neill's deputy, told parliament after Marape's election.