New mystery metal monolith appears atop a mountain in California 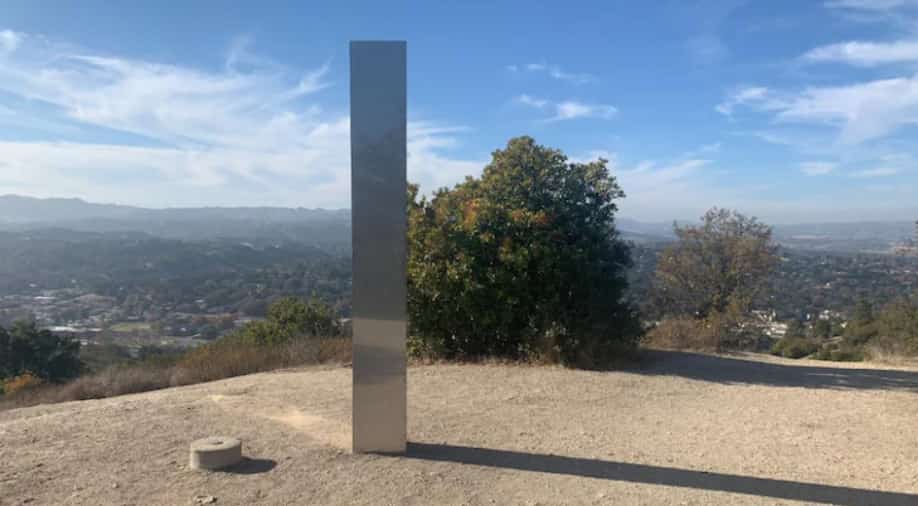 A local newspaper in a town in the central California coast reported that the silvery column had been found atop Pine mountain. Local hikers later posted pictures on the internet.

A new mystery metal monolith has appeared on the top of a mountain in California -- a week after a similar structure was pictured in the deserts of Utah.

A local newspaper in a town in the central California coast reported that the silvery column had been found atop Pine mountain. Local hikers later posted pictures on the internet.

“The three-sided obelisk appeared to be made of stainless steel, 10-feet tall and 18 inches wide. The object was welded together at each corner, with rivets attaching the side panels to a likely steel frame inside,” the Atascadero News reported.

The newspaper reported the Atascadero monolith was apparently a little wobbly and that it might be possible to push it over.

A similar structure was reportedly found in the mountains of Romania too.

The shiny pillar, which protruded some 12 feet from the red rocks of southern Utah, was first spotted on November 18 by baffled local officials counting bighorn sheep from the air.

Images emerged Tuesday of four men working in the dead of night to remove the strange, triangular pillar that had garnered global attention from its remote resting place in the western United States desert.

Photographer Ross Bernards, who visited the monolith Friday, described in an Instagram post accompanying the photos how four men suddenly appeared that night, pushed the object over and dismantled it before carrying it off in a wheelbarrow.

The shiny metal monolith vanished on Tuesday from the mountainous Neamt county, four days after its sudden appearance close to an ancient Dacian fortress sparked speculation it may be related to a mystery structure seen in the United States.

Also read | After Utah, the metal monolith has now disappeared from Romania. Where could it appear next?