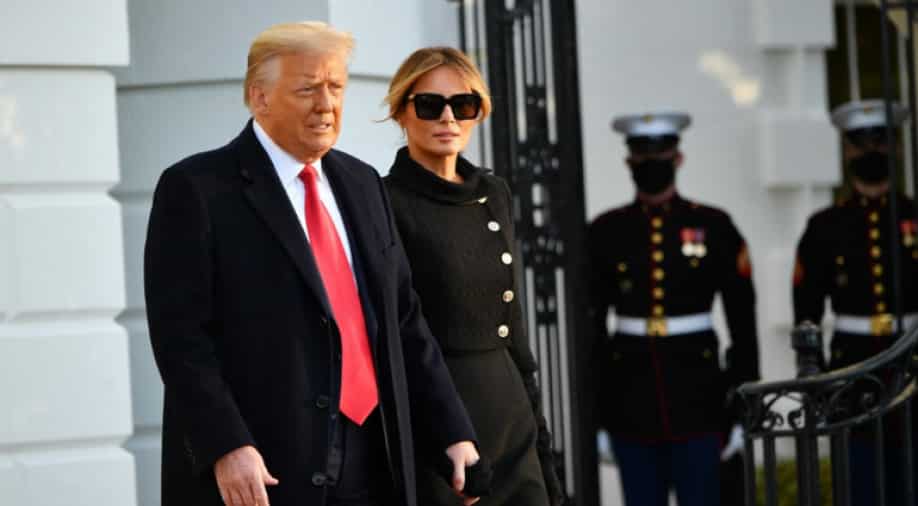 File photo: Former US President Donald Trump and his wife Melania make their way to board Marine One before departing from the South Lawn of the White House in Washington, DC Photograph:( AFP )

When asked if she could be living in the White House again should her husband run for reelection, Melania said, 'Never say never'

In her first interview since leaving the White House, Melania Trump has hinted she would like to have a second term as the first lady of the United States.

Accusing the media of bias and double standards, Melania told Fox News: "People I see always criticise me, whatever I do, and I'm used to that."

"They're biased, and they have likes and dislikes. It's so obvious, and I think American people and everyone see[s] it."

"I move forward, and I'm here… helping people, and that is the mission," she added.

Reflecting on her time as the first lady, "I have much [sic] more important things to do, and I did in the White House than being on the cover of Vogue."

Her comments were a jibe at First Lady of the United States Jill Biden and Vice President Kamala Harris who had appeared on the cover of the fashion magazine.

When asked if she could be living in the White House again should her husband run for reelection, Melania said, "Never say never."

Melania Trump launched an NFT sales platform last year, with an inaugural image of her own eyes, and now a collection is coming that lauds Former US President Donald Trump's single term in office.

The 10,000-piece issue of "digital artwork highlights iconic moments from Trump's administration," her office said in a statement, citing an example of Christmas at the White House.

"Collectors will enjoy an element of surprise as the artwork of each NFT is revealed only after purchase," the statement added, noting Melania Trump provided "creative direction" for the collection.

The Republican billionaire's NFTs, dubbed "POTUS TRUMP NFT Collection," will be sold at a fixed price of $50 each via an extension of Melania Trump's platform.

Trump, who is 75, has hinted but never definitively said whether he will seek the presidency again. After losing the 2020 election, he is currently under the shadow of multiple investigations and lawsuits, including over his tax filings and his efforts to cling to power.