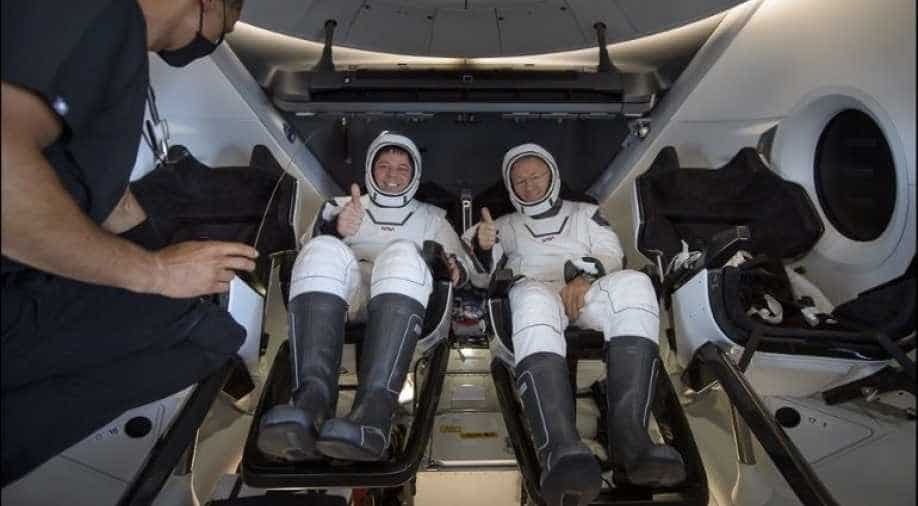 'To anybody who has touched Endeavour, you should take a moment to just cherish this day,' said astronaut Doug Hurley.

NASA astronauts Bob Behnken and Doug Hurley had a successful splash down in the Gulf of Mexico on Sunday 2:48pm.

Behnken and Hurley had a 21-hour overnight journey aboard Crew Dragon "Endeavor", and had a successful landing in the calm waters of Gulf of Mexico, despite warnings of hurricane.

With this, the two astronauts completed their two-months long journey that started on May 31. The mission was important as it was the first time a private company was able to launch a human-controlled spacecraft and bring them back. For NASA, it was the first time since its shuttle program retired in 2011, as since then NASA has relied on Russia's space program to launch its astronauts to the International Space Station (ISS).

.@AstroBehnken and @Astro_Doug have been lifted out of the water and are aboard the Go Navigator. Welcome home. #LaunchAmerica pic.twitter.com/gjqUcLMy8X

NASA astronauts are conducting tests and checking the status of the seven-seater spacecraft after a successful spin around the orbit. The craft has been observed to be in a "very healthy" condition  in the initial reports.

For the process of splashdown, the on-board thrusters and two sets of parachutes worked autonomously to slow down the capsule. This helped bring the speed of 17,500 miles per hour in orbit down to 350 mph upon atmospheric reentry, and eventually 15 mph at splashdown.

During reentry to Earth's atmosphere, the capsule's outer shell withstood temperatures as high as 3,500 Fahrenheit while Behnken and Hurley, wearing SpaceX`s white flight suits strapped inside the cabin, experienced 85 Fahrenheit.

"To anybody who has touched Endeavour, you should take a moment to just cherish this day."

After spending a night in the space on Saturday en route Earth, the astronauts were woken up to messages from their sons. "Good morning Dragon Endeavor," Hurley's son said in a recorded message sent to the capsule. "I'm happy you went into space but I'm even happier that you're coming back home."

As astronaut Behnken was being brought out of the spacecraft, Doug said, "To anybody who has touched Endeavour, you should take a moment to just cherish this day."

The astronauts met their families and addressed the nation soon after which was live broadcasted by NASA on its Twitter account.

👀 Views of @AstroBehnken and @Astro_Doug being greeted by family members as they step off the plane at Ellington Field. #LaunchAmerica pic.twitter.com/aHNLuD01Xt

"We're both super, super proud having been just a small part of the team that accomplished bringing those spaceflights back to the Florida coast and bringing that capability back to America," astronaut Behnken said.

The US President Donald Trump, who was also present at the launch site, congratulated and thanked the NASA and SpaceX team through a tweet. "Great to have NASA Astronauts return to Earth after very successful two month mission. Thank you to all!," he tweeted.

Great to have NASA Astronauts return to Earth after very successful two month mission. Thank you to all!