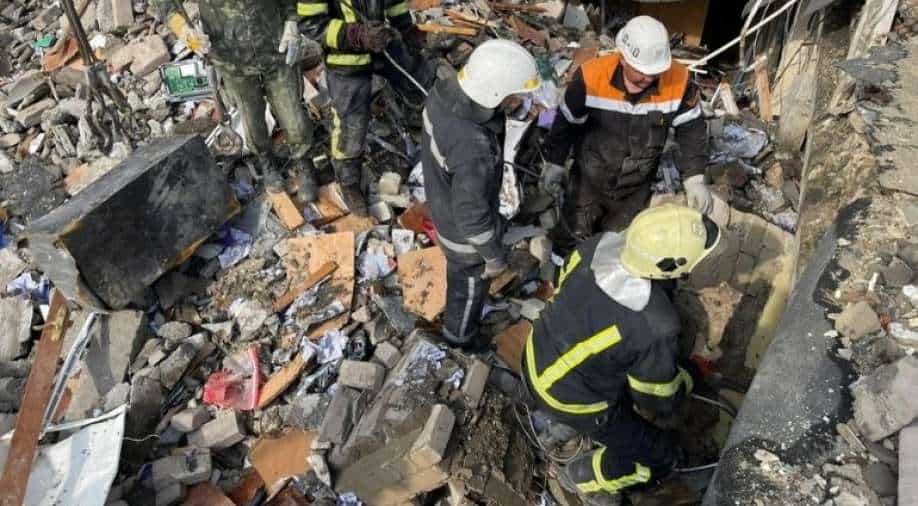 This handout picture released by the State Emergency Service of Ukraine shows rescuers conducting search operations and dismantling debris of a government building in Mykolaiv which was hit by Russian rockets  Photograph:( AFP )

Mykolaiv, a strategically important city en route to Ukraine’s largest port of Odesa, has withstood weeks of shelling by the Russian forces

Mykolaiv's Governor Vitaliy Kim said on Saturday that at least 35 people have been confirmed killed as a result of Russia's rocket strike on the regional administration building.

Rescuers sent by the State Emergency Service have been searching the wreckage for survivors since Russian forces struck the building.

The governor, who was not on the premises at the time of the attack, later posted social media images showing a gaping hole in the nine-story structure.

Mykolaiv, a strategically important city en route to Ukraine’s largest port of Odesa, has withstood weeks of shelling by the Russian forces.

Meanwhile, AFP journalists said the bodies of at least 20 men in civilian clothes were found lying in a single street Saturday after Ukrainian forces retook the town of Bucha near Kyiv from Russian troops.

Sixteen of the 20 corpses found on one street in Bucha were lying either on the pavement or by the verge. Three were sprawled in the middle of the road, and another lay on his side in the courtyard of a destroyed house.

As Russian troops continue their war in Ukraine, the country's defence ministry said Russian troops were on "partial retreat" from the north of Kyiv.

Earlier this week, Russia had said it would be scaling back operations around Kyiv and Chernihiv located in northern Ukraine during peace negotiations in Istanbul, however, reports claim fighting continues in some areas.

Ukraine President Zelensky in a video message said Russian troops were making a “slow but noticeable” withdrawal from northern areas.

“We are moving forward, moving carefully,” Zelensky added however the Ukraine president said the situation in the east remained “extremely difficult” as Russian troops were "preparing for new powerful blows".

“I emphasise again, hard battles lie ahead. We cannot think we have already passed all the tests," Ukraine's president warned.

President Volodymyr Zelensky's political adviser Oleksiy Arestovych said: "Our troops are chasing them both to the northwest and northeast (of Kyiv), pushing the enemy away from Kyiv."

Arestovych added that Russia was in fact carrying out troop rotation and sending its forces to eastern Ukraine.

Ukraine and its allies call this a baseless pretext for a war of aggression. Since the invasion, more than 10 million people have been displaced from their homes.