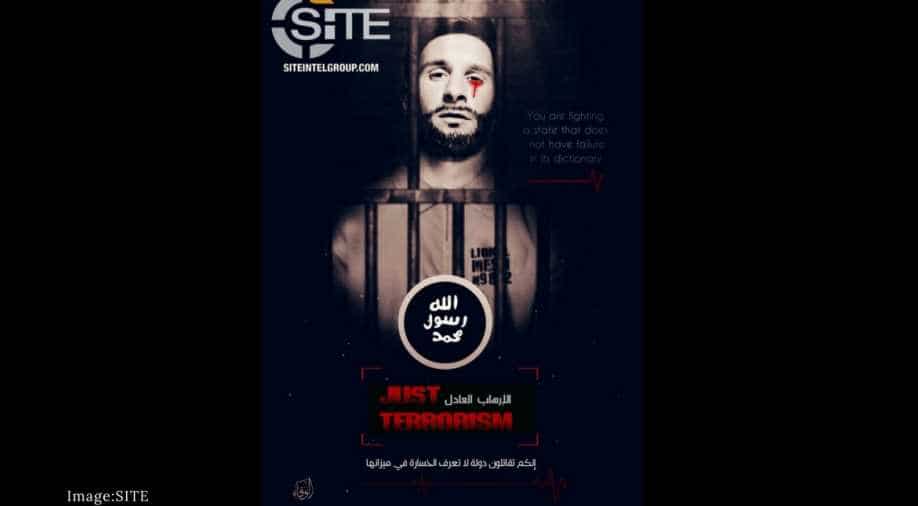 Ahead of the FIFA World Cup to be held in 2018, the Wafa Media Foundation,  a pro-ISIS group on Twitter, releases a shocking image to threaten fans and followers of football.

The Islamic State's mouthpiece used the face of the Argentinian football legend Lionel Messi to convey their ideology. The released poster says 'Just Terrorism' and 'You are fighting a state that does not have failure in its dictionary'. Also in the poster, Lionel Messi is standing behind the bar with one eye crying blood.

The poster is intended to spread terror among football fans, indicating also that the terror group may carry a terror attack during FIFA World Cup. The other posters released by them contain pictures of rifles and explosives. Last week, Wafa Media Foundation published one photo of a fighter carrying a rifle and a time-bomb with the ISIS black flag in front of a football stadium. The official symbol of the 2018 World Cup finals was also included in the image.

The poster says, "Oh, enemies of Allah in Russia, I swear that the fire of the mujahideen will burn them, just wait,". (Twitter)

Politics has always been part of all sporting events in the recorded history of humankind. When Indian football clubs played with their British counterpart, it was very much a display of nationalist sentiment. In more recent times, every cricket match between India and Pakistan was an extension of the political tension that exists between the two nation. Winning a match has become more than a sporting event, it has come to signify, unfortunately, the superiority of one nation over the other. Political permeation of sports is not limited to the subcontinent; every football match played between and English and Wales football club show the domineering influence of politics, often sidelining the sporting spirit.

For repressive minority groups, sports events have often served as a tool to convey their sufferings to the rest of the world. For instance, recently, American football player Colin Kaepernick initiated a protest against New York police brutality. The NFL players either took a knee during the national anthem before a game or stand with arms locked in silent protest. This bold move started as a result of repeated videos showing police shooting and killing unarmed black men.

Racism has time again inspired players to protest. In the 1968 Olympics, 200m gold and bronze medalist Tommie Smith and John Carlos respectively took up a public stance against racism. They stood with their heads bowed and raising a black-gloved hand as the American National Anthem played during the victory ceremony.

Tommie Smith and John Carlos (Others)

But, terrorism in sports is something that has caused global concern and condemnation. The threat of terrorism has become a major threat to all major sporting events as causing a debacle there, the terrorists understand well enough, would have global repercussions. Sporting events, such as the Olympics, football tournaments and cricket matches have been targeted, some of them had a larger impact such as the 1972 Olympics in Munich.

The Palestine Liberation Organization terrorist at 1972 Munich Olympics. (Others)

At the Munich Olympics, eleven Israeli Olympic team members were taken as the hostage and eventually killed, along with a German police officer, by the Palestinian terrorist group Black September. The attack was motivated by the desire to release members of the Palestine Liberation Organization held in captivity in Israeli prisons. German neo-Nazis gave logistical help to the commander of the terrorist group, Luttif Afif in carrying out the brutal attack.

The Boston Marathon of 2013 witnessed another bloody chapter in global sports history; two bombs were detonated near the finishing line, leaving three people dead and more than 260 injured. These attacks will always be considered as dark chapters in the history of sports, and the recent one targeting FIFA World Cup is another chapter added to the books on 'sports and terrorism'.

Double bombings near the finish line of the Boston Marathon killed three people and injured at least 264. (Others)

Terror threat to FIFA World Cup will definitely influence the football festival. Having millions of followers, the Argentinian star is a legend and is also one of the favourites in the football fraternity. The terrorist, thus, very judiciously picked up the poster boy of the game.

Hence, these continuous terrorist threats raise a serious question as to how the Russian government is going to deal with the security issues during the World Cup. Meanwhile, these threats will remain the main concern for football fans and followers, who are eager to visit Russia to support their favourite teams.