Moscow set for fresh protests after month of rallies 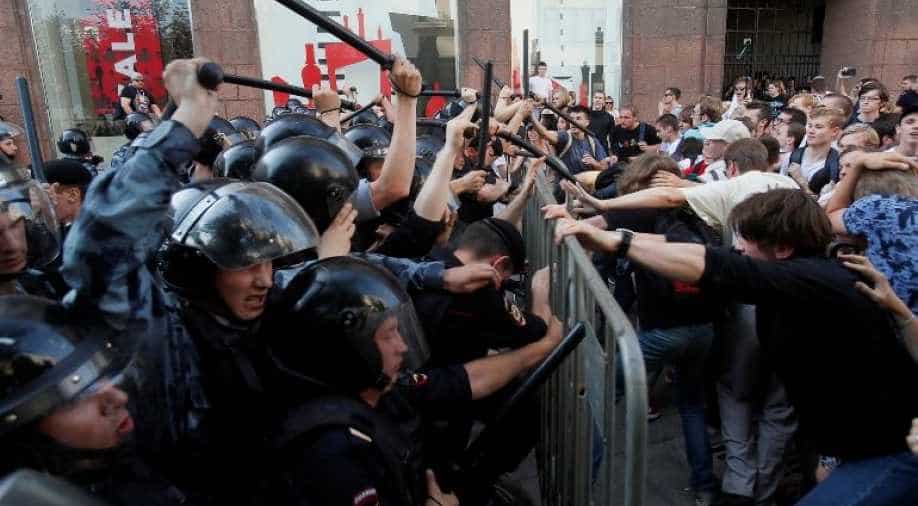 The rallies, which have taken place every Saturday since the ruling, are the biggest since mass protests broke out in 2011 against President Vladimir Putin's return to the Kremlin after a term as prime minister.

Moscow was set for fresh protests Saturday, the latest in a wave of demonstrations that has seen tens of thousands take to the streets after opposition figures were banned from local elections a month ago.

The rallies, which have taken place every Saturday since the ruling, are the biggest since mass protests broke out in 2011 against President Vladimir Putin's return to the Kremlin after a term as prime minister.

Police have come down hard on the demonstrations, which have tapped into wider anger over declining living standards and a stalling economy.

Some 3,000 people have been arrested for taking part and prominent members of the opposition, including top Kremlin critic Alexei Navalny, remain behind bars.

At previous events police have used batons on protesters and grabbed people from the streets indiscriminately.

Organisers of Saturday's event are planning single-person pickets, in which one person at a time holds a protest sign, as these do not technically need approval from authorities to go ahead.

An approved Communist Party rally for free elections is set to be held earlier in the day.

Prosecutors have launched criminal cases against about a dozen protesters for "mass unrest", with potential prison sentences of up to eight years.

They stand accused of offences including throwing plastic water bottles at officers.

The Moscow city hall elections set for September 8 were, until last month, a relatively minor event on Russia's political calendar.

But the issue blew up after election authorities refused to register various opposition candidates over alleged violations including faking the signatures needed to qualify.

Local polls are a rare opportunity for dissenting voices to participate in political life as anti-Kremlin parties have been squeezed out of parliament over Putin's two decades in power.

The Kremlin commented on the month-long protests for the first time this week, seeking to play down the significance of the rallies.

"We do not agree with those who call what is happening a political crisis," said Putin's spokesman Dmitry Peskov, who defended an "absolutely justified" police response.

Video of a policeman punching a woman in the stomach as she was being detained after a sanctioned protest last week went viral. The interior ministry said it was opening an investigation.

Russian political scientist Ekaterina Shulmann said the cases against participants were "making people angry -- they are broadly perceived as unjust and disproportionately cruel".

While they have a "terrorising effect in the sense that people may be afraid to get out on the streets, at the same time they strengthen the protest mood because they are so blatantly unfair," she told.

"The protest movement is politically weak, there's no clear goal," she said, adding that many were "outraged" by the repressive actions of authorities.

Popular figures such as rapper Oxxxymiron and YouTube star Yury Dud have come out in support of the demonstrations, urging their fans and followers to go to sanctioned rallies.

Moscow has accused foreign governments and media of backing the protests, and next week Russian lawmakers will hold a special session to discuss the alleged "meddling".

Authorities have meanwhile upped the pressure on the opposition, focusing on Navalny's anti-corruption foundation which publishes investigations of officials close to Putin.

Investigators have raided the foundation's office as part of a probe into alleged money laundering and a court froze the organisation's accounts.