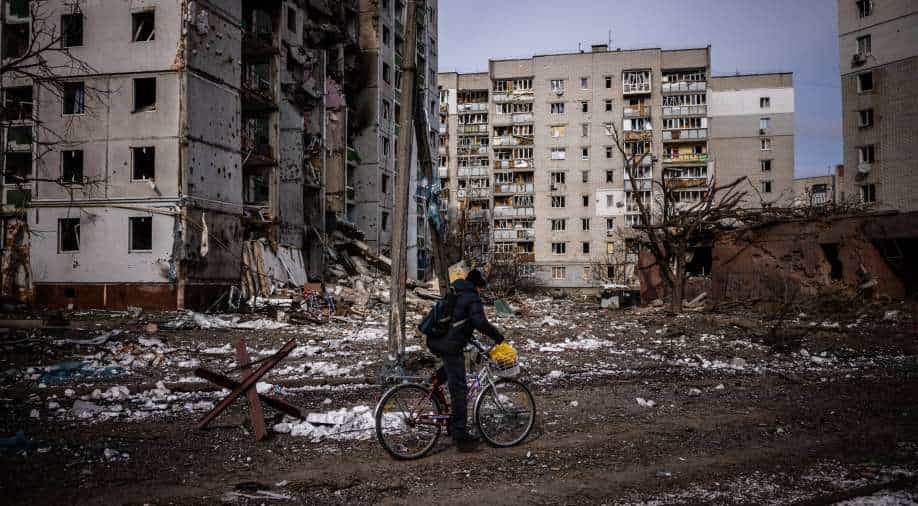 A man rides his bicycle in front of residential buildings damaged in yesterday's shelling Photograph:( AFP )

According to the report, the Pentagon had started sending arms as early as December. It had sent shotguns and specialized suits to safeguard soldiers handling unexploded ordnance.

The US newspaper further states that the volume of such exports increased dramatically in the last week with the Biden administration sending Stinger antiaircraft missile systems for the first time and supplying antitank Javelin missiles among other ammunition.

“This is a continuous process. We are always, always looking at what Ukraine needs, and we’ve been doing this for years now,” Washington Post quoted a senior defence official who was speaking to reporters on Friday on the condition of anonymity.

In February, US approved a $350 million in military assistance to Ukraine, of which $240 million has already been transferred, the official was quoted as saying said.

The United States, which is one of 14 countries that have delivered security assistance to Ukraine, committed about $3 billion in military aid to Ukraine since Russia annexed Crimea in 2014.

The revelations come days after US President Joe Biden announced that US forces would not engage with the Russian forces in Ukraine.

Biden clarified that the US troops were deployed to Europe not to fight in Ukraine, "but to defend our NATO allies in the event that Putin decides to keep moving west."

"For that purpose, we have mobilised American ground forces, air squadrons, ship deployments to protect NATO countries, including Poland, Romania, Latvia, Lithuania, and Estonia," he added.

At least 331 civilians are confirmed killed and 675 injured in Ukraine since Russia's invasion began on February 24, but the real toll is likely much higher, the UN has said.

Located on the Sea of Azov, the city of 450,000 people has been bombarded by shelling and cut off without water or electricity in the depths of winter.