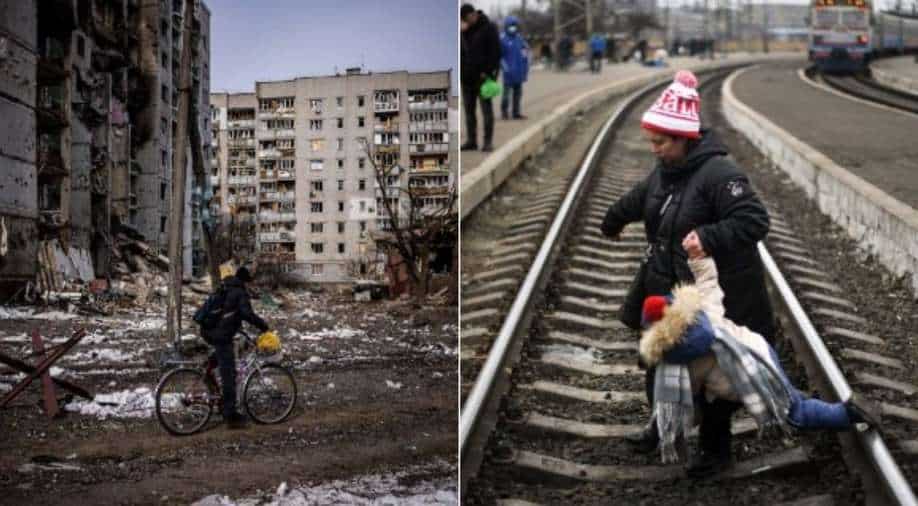 (Right) A mother helps a child to cross the train railways at Lviv central train station on March 4, 2022. Photograph:( AFP )

Russia's defence ministry announced a ceasefire Saturday to allow residents of two besieged cities, including the strategic port town of Mariupol, to evacuate

Amid the escalating tensions, Russia's defence ministry said that Moscow has declared a partial ceasefire on Saturday (March 5) to allow humanitarian corridors out of the Ukrainian cities of Mariupol and Volnovakha, Russia's RIA news agency reported.

As Russia's invasion of Ukraine entered into its 10th day, a channel for humanitarian corridors for the safe evacuation of civilians was agreed upon by Russian and Ukrainian officials during their second round of talks on Saturday (March 5).

Russia's defence ministry announced a ceasefire Saturday to allow residents of two besieged cities, including the strategic port town of Mariupol, to evacuate.

"Today, March 5, from 10 am Moscow time, the Russian side declares a regime of silence and opens humanitarian corridors for the exit of civilians from Mariupol and Volnovakha," the ministry said.

The Ukrainian government said the plan was to evacuate around 200,000 people from Mariupol and 15,000 from Volnovakha, and the Red Cross is the ceasefire's guarantor.

However, there was no immediate confirmation that firing had stopped and it was not clear if the ceasefire would be extended to other areas.

WATCH | How many civilians, troops have died till now?