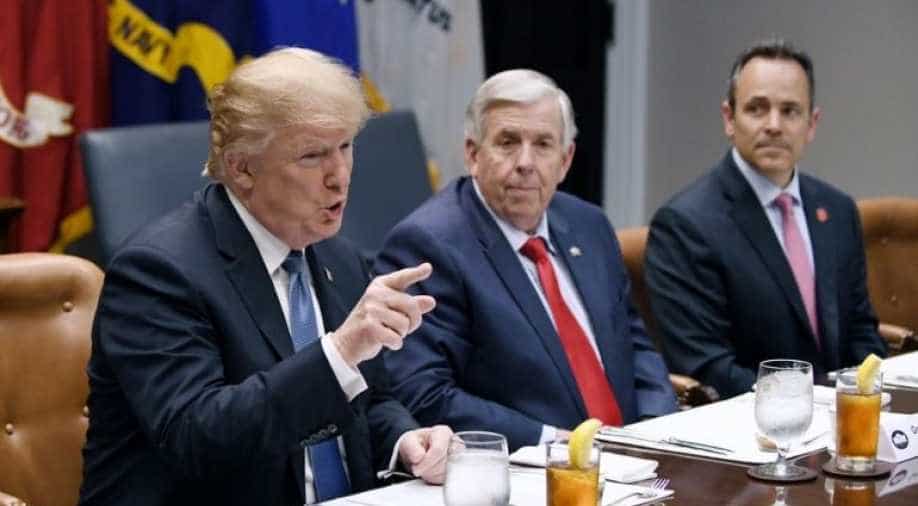 US President Donald Trump flanked by Governor Mike Parson(2ndR) R-MO and Governor Matt Bevin R-KY speaks during a working lunch in the Roosevelt Room of the White House, in Washington. Photograph:( AFP )

The legislation allows for an abortion after the eighth week only in the case of medical emergencies. On Wednesday, Alabama banned abortions at any time, with the same exception.

Missouri lawmakers passed a bill on Friday that prohibits women from seeking an abortion after the eighth week of pregnancy, days after Alabama enacted the most restrictive abortion law in the United States.

The legislation allows for an abortion after the eighth week only in the case of medical emergencies. On Wednesday, Alabama banned abortions at any time, with the same exception.

Similar laws have been proposed in more than a dozen other states as Republican-controlled legislatures push to restrict the rights of women to terminate their pregnancies.

The state's Republican governor, Mike Parson, is expected to sign the bill into law. He has said he would make Missouri "one of the strongest pro-life states in the country."

Missouri's House of Representatives gave its final legislative approval in a 110-44 vote after protesters were removed from the public gallery. Missouri senators overwhelmingly approved the legislation on Thursday.

"Today, the Missouri House stood for the unborn," the speaker of the house, Elijah Haahr, said in a statement. "The bold legislation we sent to the Governor's desk is the strongest and most comprehensive pro-life bill in the country."

Opposing the bill, Dr Leana Wen, president of Planned Parenthood Action Fund, said it was a "terrifying time" for women in America.

Renewed efforts to roll back Roe v. Wade, the landmark US Supreme Court decision that legalized abortion nationwide in 1973, have been emboldened by two judicial appointments by President Donald Trump that have given conservatives a solid majority on the court.

At a time when US rates of abortion have sharply declined, the appointments have put fresh energy into the political struggle between religious conservatives and others who those who believe foetuses should have comparable rights to those of babies after birth, and those who see such restrictions as an infringement on women's rights.

The re-energized debate coincides with the run-up to the 2020 US presidential election. Abortion-rights activists argue that rolling back 45 years of legal precedent to criminalize abortion would endanger women who seek dangerous illegal abortions.

The US abortion rights activists have vowed to go to court to block enforcement of the Alabama law, which is scheduled to take effect in six months.

The Missouri bill passed the Senate on Thursday in a party-line vote, with 24 Republicans supporting it and 10 Democrats opposed.

In common with the Alabama bill, it would outlaw abortion even in the case of rape or incest and make violations by doctors punishable by prison sentences.

The measure would not make women who seek out the procedure subject to criminal prosecution, although opponents of the statute said it was ambiguous about the criminal liability of a woman accused of inducing her own miscarriage.

The measure also would ban abortions altogether except for medical emergencies should the Supreme Court overturn Roe v. Wade.

As of May, lawmakers have introduced legislation to restrict abortions in at least 16 states this year. Governors in four have signed bills into law banning the procedure if an embryonic heartbeat can be detected, generally considered to be as early as six weeks.

Some Republicans pushing for abortion restrictions acknowledge they are deliberately doing so to instigate court challenges that will ultimately force the Supreme Court to reconsider Roe v. Wade.

The ruling held that the due process clause of the 14th Amendment provides a fundamental right to privacy that protects a woman's right to abortion.

It also allowed states to place restrictions on the procedure from the time a foetus could viably survive outside the womb. The opinion stated that viability is usually placed at about seven months, or 28 weeks, but may occur earlier.