'Mind your uterus': Protests erupt in US against anti-abortion laws 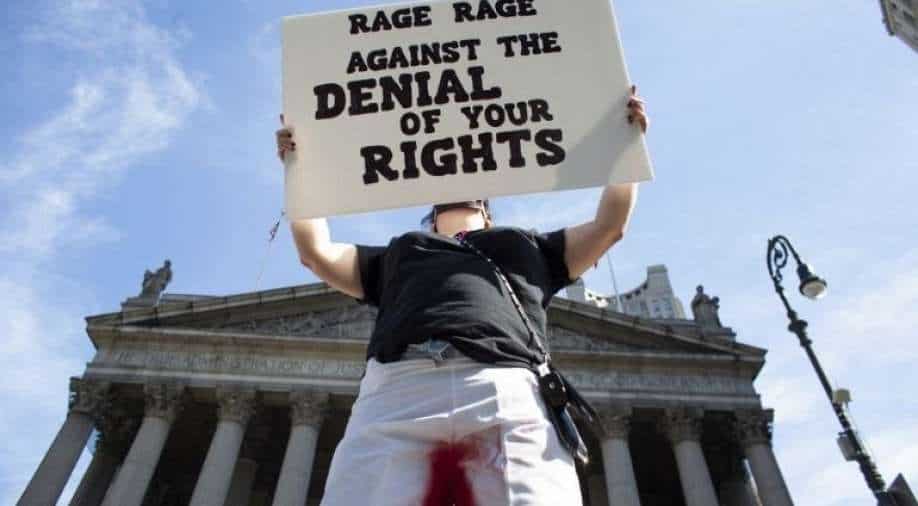 Since the heartbeat law came into force in September last year, Texan neighbour states like Oklahoma have seen a flood of patients seeking abortions. This has led to long wait times and maxed out clinic capacities. Now, with a similar law in Oklahoma, these patients would have to go farther and farther. Photograph:( AFP )

Saturday saw one of the biggest protests across the country as tens of thousands of people raised their voices against anti-abortion laws. Several lawmakers have also been openly and fiercely contesting these laws in the Supreme Court and media, including the President of the United States, Joe Biden

Making sure that the government and all other lawmakers know their stand against the ‘inhumane’ and ‘discriminatory’ anti-abortion rules, tens of thousands of people took to streets across the United States.

With placards reading ‘Mind your uterus’, ‘Hands off my body’, ‘Make abortion legal’, and more, many protestors also dressed up as the late Supreme Court justice Ruth Bader Ginsburg who was known for fighting for women’s rights.

Many people also brought out creative jackets on which they stitched names and pictures of several other women activists and politicians who have supported the right to abort in the past.

"Women are humans, we are full humans, and we need to be treated like full humans," Laura Bushwitz, a 66-year-old retired Florida teacher protesting in Washington, told news agency AFP. "We should be able to have our own choice on what we want to do with our bodies. Period."

The fight between women and lawmakers has been going on since long but has now intensified as the state of Texas passed a law that makes all abortions, at any time of the pregnancy, a crime.

Several lawmakers have also been openly and fiercely contesting these laws in the Supreme Court and media, including the President of the United States, Joe Biden. The President has made it clear on several occasions that he supports women’s right to their own bodies and does not lend support to the anti-abortion laws passed by the state of Texas.

On Saturday, protests took place in nearly 600 cities across all 50 states where some women came out dressed in pink hats and some dressed in their most comfortable clothes to make sure they can raise their voice as loud as needed to reach the top-tier government officials.

These protestors also clashed with another set of demonstrators in Washington who were rallying in support of the discriminatory laws. The two groups had to be segregated by the local police officials present at the scene, but nobody was injured.