Military’s role in vaccine will be strictly behind the scenes, despite Trump’s claims 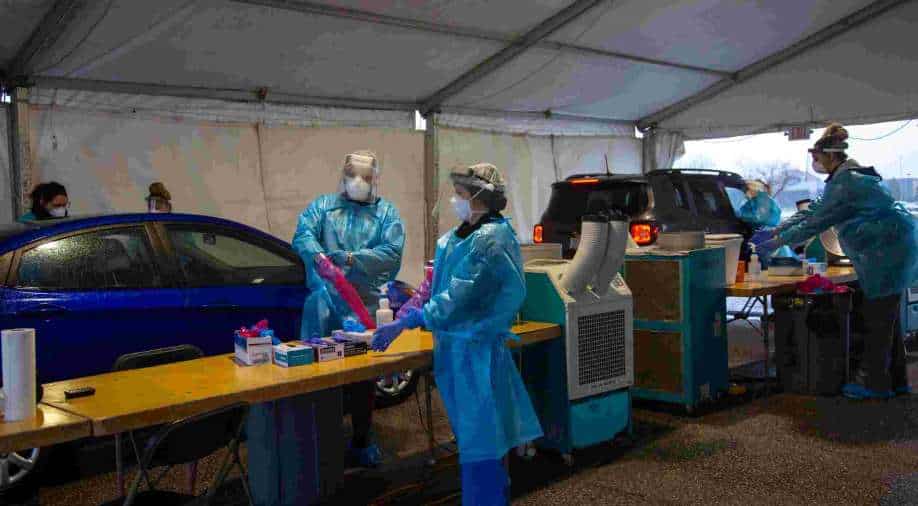 Trump has given the impression that troops would be packing up vials, transporting them from factories to pharmacies and perhaps even administering shots.

WASHINGTON — When President Donald Trump talks about efforts to deliver the coronavirus vaccine to millions of Americans eager to return to their normal lives, he often says he is “counting on the military” to get it done.

Trump has given the impression that troops would be packing up vials, transporting them from factories to pharmacies and perhaps even administering shots. And, at times, military officers working on the sprawling interagency program to move those vaccine doses from drug companies into doctors’ offices have indicated the same thing.

In reality, the role of the military has been less public and more pervasive than this characterization suggests.

When companies have lacked the physical spaces needed to conduct their drug trials, the Defense Department has acquired trailers and permits to create pop-up medical sites in parking lots. When a required piece of plastic or glass was in short supply, the military leveraged a law passed during the Korean War to force manufacturers to move them to the front of the line. Should a hurricane hit somewhere, blocking trucks, the military has transportation ready.

But the distribution of vaccines will be left largely to their producers and commercial transportation companies. Black Hawk helicopters will not be landing next to neighborhood drugstores to drop off doses. No troops will be administering shots.

“It is extremely unlikely that anyone from the government will touch a vaccine, whether that’s loading a truck, unloading a truck, moving dry ice or actually injecting the vaccine before Americans getting it,” said Paul Mango, the deputy chief of staff for policy at the Department of Health and Human Services and the main spokesman for Operation Warp Speed, the multiagency federal consortium for fast-tracking a vaccine.

However, he added, “every logistical detail you could think of, needles, syringes, swabs, bandages, dry ice,” could be procured through the government contracting process, and often faster than through the private sector.

Scores of Defense Department employees are laced through the government offices involved in the effort, making up a large portion of the federal personnel devoted to the effort. Those numbers have led some current and former officials at the Centers for Disease Control and Prevention to privately grumble that the military’s role in Operation Warp Speed was too large for a task that is, at its core, a public health campaign.

Wrangling volunteers for four expedited vaccine trials — a chore in any circumstance — became even more challenging during a pandemic, when asking hundreds of thousands of subjects to sit in hospital waiting rooms and other health care centers was often not feasible. The Pentagon has helped three companies — AstraZeneca, Moderna and Janssen — set up pop-up sites to conduct trials at 63 locations nationwide.

Needed for each site: double-wide trailers equipped with wheelchair ramps and septic systems. Also, some will need to be hurricane-proof.

These are the types of things that the military can quickly obtain through its contracting system, as well as any permits needed to set it all up. “We have the ability to set up large-scale housing capabilities throughout the entire world at a moment’s notice,” Ostrowski said.

Military officials can call up companies, he said, “And say, ‘I need X number of trailers, and I need them immediately.’” The personnel on his team “work closely with all the city officials to make sure we have all the certificates and that all the codes are being addressed,” he said.

The two pharmaceutical companies leading the vaccine race, Pfizer and Moderna, have estimated that they will have 45 million doses, or enough to vaccinate 22.5 million Americans, by early next year. Because they began manufacturing vaccines that were awaiting federal approval, they should be ready to begin shipping them within days of securing it.

But some companies were hampered by a lack of excess manufacturing capacity in the United States and a shortage of many of the goods needed to make and package vaccines. For raw materials, the military has been able to leverage its contracting muscle, as well as the Defense Production Act, a Korean War-era law that permits the federal government to impose some control over the private sector.

“Everyone is clamoring for that substance or this product,” Ostrowski said. “That’s what we do, we understand capturing supply chains.”

Operation Warp Speed has issued six Defense Production Act orders to companies to put themselves at the front of the line for certain supplies, like large vats needed to produce a vaccine. In October, the government awarded $31 million to manufacturer Cytiva to expand production of the vats.

“There are only a certain number of producers of those in the world,” Ostrowski said. “We were able to make sure they knew where the priority was.”

Military officials also came up with the clever idea — if it works — to coordinate the delivery of vaccines to drugstores, medical centers and other immunization sites by sending kits full of needles, syringes and alcohol wipes. Vaccine makers will be alerted when the kits arrive at an immunization site so they know to ship doses. Once the first dose is given, the manufacturer will be notified so it can send the second dose with a patient’s name attached several weeks later.

But when it comes to the herculean task of vaccine distribution, the job will largely fall to the manufacturers to get the vaccines from loading docks to pharmacies and medical offices.

While governors may use their National Guard units in their vaccine programs, the military is least likely to play a role in moving doses of the vaccine — and certainly troops are not expected to help administer shots, even though Trump has suggested that they will.

“I was surprised when Trump talked about the Department of Defense disseminating any vaccine,” said Dr. Marcus Plescia, the chief medical officer for the Association of State and Territorial Health Officials, which has been deeply involved in the planning process for the vaccines. “There is not any role for the military there. And if there were, we would be up in arms about it because we are advocates for the states.”

Concerns about conspiracy theories surrounding the vaccines are even more reason to keep the military out of sight, Plescia said. “There has been a lot of concern around vaccine hesitancy, and having a bunch of troops around would not be very helpful,” he said. “Even having the National Guard participate could have a down side.”

As one of the largest suppliers of liquid-injectable medicine in the country, Pfizer already has a large network of commercial shippers that helps move its drugs from its manufacturing facility in Michigan to providers around the country. This will be all the more important with the company’s coronavirus vaccine, which needs to be kept at a subfreezing temperature.

The military has spent hours conducting tabletop exercises to help think through how the program could go awry and how it might need to step in to help.

“The government has offered any and all support and is prepared to help clear any obstacle,” said Amy Rose, a spokeswoman for Pfizer. Of the six companies developing a vaccine, the pharmaceutical giant was the only one to reject federal funding.

Pentagon planners have looked at a range of risks to distributing a vaccine, from large-scale protests that could disrupt traffic to poor weather conditions. The military says it can use its airplanes and helicopters to deliver vaccines to remote locations, but only if no other means of transportation are feasible.

The military will also monitor vaccine distribution through an operations center. “They will know where every vaccine dose is,” Mango said on a call with reporters. “If a vaccine dose is at risk of expiring, they will guide the movement of that to someplace else.”

Ostrowski said this specific assignment was worth delaying his retirement. “This is very important to our nation and our world,” he said. “I could think of no better challenge and something more noble than being able to do this.”