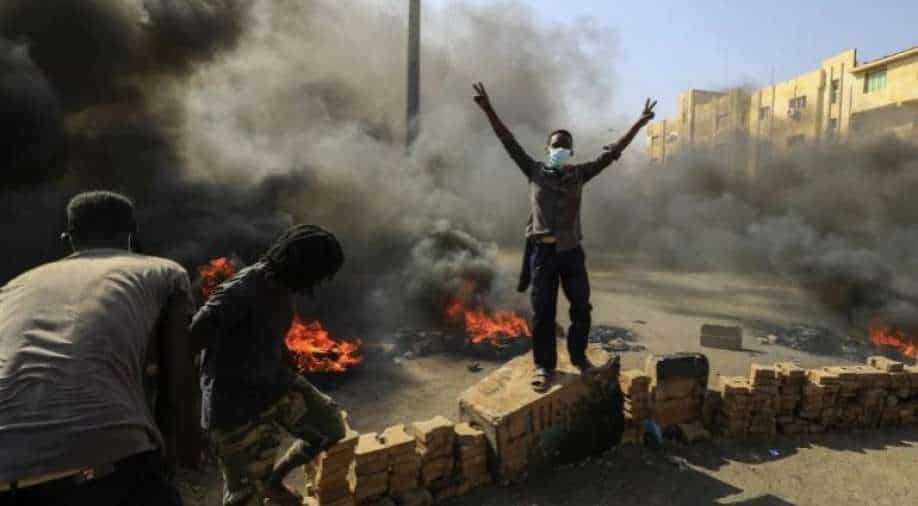 A takeover by the military would be a major setback for Sudan, which has grappled with a transition to democracy since long-time ruler Omar al-Bashir was toppled by mass protests two years ago.

Sudan's interim prime minister and many top government officials were detained on Monday, according to the information ministry, which described the events as a military coup.

According to the ministry's Facebook page, the country's internet was mostly shut off, and armed personnel barricaded bridges.

Prime Minister Abdalla Hamdok's whereabouts were not immediately known, according to the report.

In separate pleas, the country's major pro-democracy organisation and the country's largest political party asked citizens to come to the streets to protest the apparent military coup.

Thousands of people poured onto the streets of Khartoum and Omdurman, its twin city. 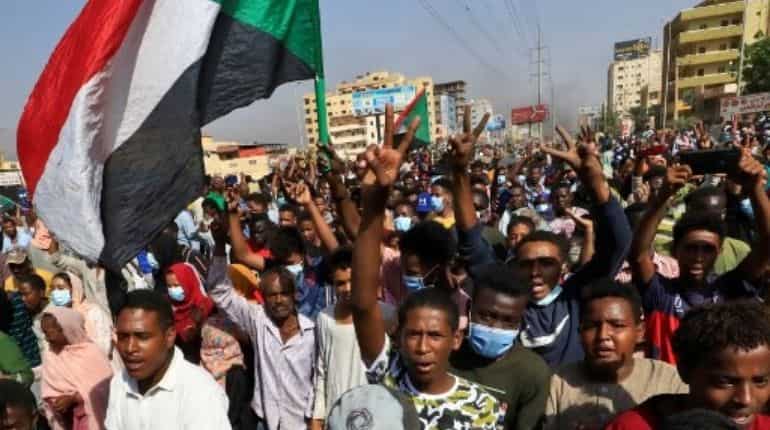 Sudanese protesters lift national flags as they rally on 60th Street in the capital Khartoum, to denounce overnight detentions by the army of government members, on October 25, 2021. (AFP Photo)

Protesters reportedly blocked roadways and set fire to tyres while police officers used tear gas to disperse them, according to footage uploaded online.

Sudan has been grappling with a democratic transition since long-time ruler Omar al-Bashir was deposed by huge demonstrations two years ago, and a military takeover would be a severe setback.

Jeffrey Feltman, the US Special Envoy to the Horn of Africa, stated early Monday that Washington was "very disturbed."

The arrests on Monday came after weeks of escalating tensions between civilian and military officials in Sudan.

A failed coup attempt in September polarised the country, pitting more hardline Islamists who seek a military rule against those who overthrew al-Bashir in rallies.

Both factions have turned to the streets in recent days in protests.

Hamdok was apprehended and brought to an unidentified location, according to the information ministry's Facebook page.

A number of officials were also detained, according to the report, and their locations were unknown.

Earlier Monday, two officials confirmed that at least five government figures were being held. The officials spoke on condition of anonymity because they were not authorised to speak to the media. The officials said the detained government members include Industry Minister Ibrahim al-Sheikh, Information Minister Hamza Baloul, and Mohammed al-Fiky Suliman, member of the country's ruling transitional body, known as The Sovereign Council, and Faisal Mohammed Saleh, a media adviser to Hamdok. Ayman Khalid, governor of the state containing the capital, Khartoum, was also arrested, according to the official Facebook page of his office.

Under Hamdok and the transitional council, Sudan has slowly emerged from years of international pariah status in which it existed under al-Bashir. The country was removed from the United States' state supporter of terror list in 2020, opening the door for badly needed international loans and investment. But the country's economy has struggled with the shock of a number of economic reforms called for by international lending institutions. There have been previous military coups in Sudan since it gained its independence from Britain and Egypt in 1956. Al-Bashir came to power in a 1989 military coup that removed the country's last elected government. The arrests followed meetings by Feltman, the special U.S. envoy, with Sudanese military and civilian leaders Saturday and Sunday in efforts to resolve the dispute. Sudan's state news website highlighted the meetings with military officials. The Sudanese Communist Party called on workers to go on strike and mass civil disobedience after what it described as a "full military coup" orchestrated by the Sovereign Council's head Gen. Abdel-Fattah Burhan.

NetBlocks, a group which tracks disruptions across the internet, said it had seen a "significant disruption" to both fixed-line and mobile internet connections across Sudan with multiple providers early Monday. "Metrics corroborate user reports of network disruptions appearing consistent with an internet shutdown," the advocacy group said. "The disruption is likely to limit the free flow of information online and news coverage of incidents on the ground."

(With inputs from AP)