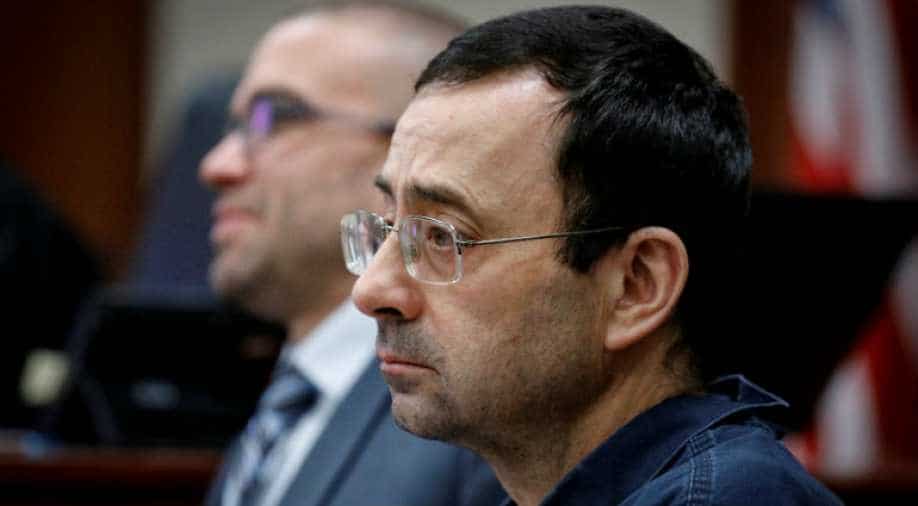 Larry Nassar, a former team USA Gymnastics doctor, listens to a victim during his sentencing hearing in Michigan, on Tuesday. Photograph:( AFP )

Michigan's attorney general promised Saturday a "full and complete investigation" into how ex-USA Gymnastics doctor Larry Nassar got away with abusing young women over the two decades he worked at a university.

Speaking at a press conference, Attorney General Bill Schuette said his department would "put a bright light at every corner" of Michigan State University (MSU), where Nassar worked until 2016.

"No individual and no department at Michigan State University is off limits," he warned.

"My department and this investigation will find out who knew what, and who took action, who failed to take action, what did or did not happen and what should have happened."

Nassar was sentenced Wednesday to up to 175 years in prison after being convicted of abusing young female patients. The abuse occurred at his sports medicine clinic at Michigan State University as well as training facilities sanctioned by USA Gymnastics.

About 160 women appeared in court or testified anonymously to the emotional pain caused by Nassar.

MSU has come under scrutiny in particular for a 2014 investigation that cleared Nassar of serious wrongdoing.

Mark Hollis, director of MSU's prestigious intercollegiate athletics program since 2008, announced Friday he was stepping down from his post -- two days after the university's president resigned.

Schuette said Michigan State University's board of trustees asked him to examine their handling of the scandal -- but he strongly rejected any input from them.

"Frankly, they should be the last ones to be providing advice given their conduct throughout this entire episode," Schuette said.

He also revealed that a special independent counsel, Bill Forsyth, has been chosen to direct the investigation.

Forsyth, a veteran prosecutor, said he had "never seen anything with the scope... of this particular investigation" during his 43-year career, and that the investigation would take "a great deal of time."

"How was he allowed to engage in this behaviour for almost 20 years?" Forsyth asked.

"Who at Michigan State knew or was aware of what he was doing?"

Michigan State Police will contribute to the investigation, joining senior investigators in the attorney general's office.

State police director Colonel Kriste Kibbey Etue said the unit "welcomes this opportunity to help the attorney general to fully investigate and determine if any other crimes have been committed."

Nassar's case has shaken US gymnastics and the US Olympic Committee subsequently announced an independent inquiry into the scandal. It demanded that the USA Gymnastics board resign en masse -- which they did on Friday.