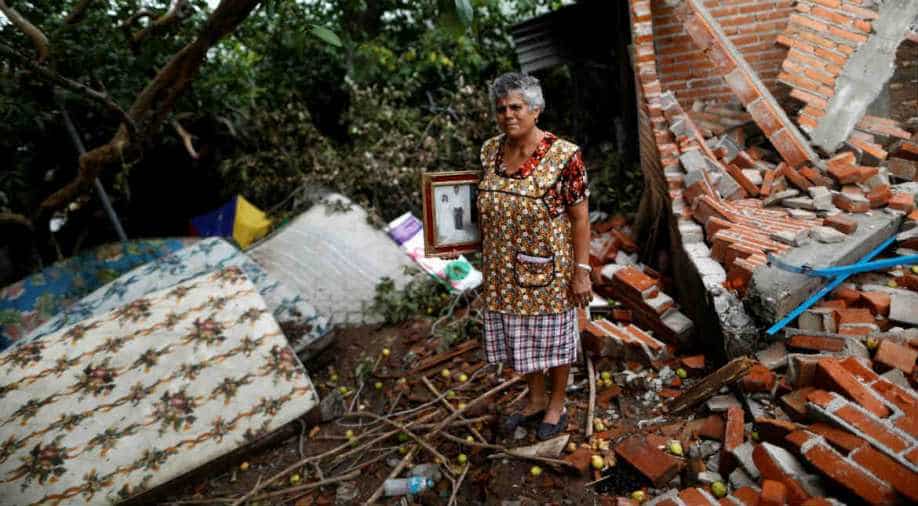 A woman standing amidst the rubble of her house after an earthquake in Mexico, on September 28, 2017. Photograph:( Reuters )

More than 8,000 homes and buildings were damaged or destroyed by the 7.1-magnitude quake

The earthquake that hit Mexico on September 19 did not discriminate in its destruction, leveling homes in rich and poor neighborhoods alike.

But one month on, the tragedies facing Mexico City's newly homeless depend largely on class.

Residents of upscale neighborhoods like Roma and Condesa face a frenzied rush to rent or buy new homes in other neighbourhoods nearby, creating a real estate bubble.

Meanwhile, in far-flung corners like Xochimilco in the south, residents say the government has forgotten them and they fight to cling to whatever they can.

More than 8,000 homes and buildings were damaged or destroyed by the 7.1-magnitude quake, which left a trail of destruction that cut across Mexico City from north to south, hitting a broad cross-section of neighbourhoods.

"You think it won't happen to you, until it does," said Gerardo Alvarez, who had to flee his home in the trendy Zona Rosa with his pregnant wife.

"My house is collapsing, there are diagonal scars on the walls," he told AFP.

For now, he and his wife are staying with friends. But they are struggling to find a new home.

"Prices have gone through the roof," said Paola Navarrete, a 31-year-old consultant.

She had to abandon her badly damaged building in Condesa. The authorities would only let her return to salvage three outfits of clothes and her documents.

Condesa, a hipster playground of trendy restaurants, bars and boutiques, looked like a wasteland after the quake, which killed 369 people, mostly in the capital.

There are no official figures on the number of newly homeless.

Some 600 people are staying in shelters. But many more are staying with relatives, friends or colleagues -- or a succession of all three.

These sometimes awkward stays have revived an old expression in Mexico: "There are two things that start to stink after three days: dead bodies and guests."

Many companies are also looking to move.

Demand for new office buildings with the latest anti-earthquake features has surged by 30 to 40 percent since the same period last year, according to figures from real estate agency Coldwell Banker Mexico cited in the newspaper El Financiero.Far from the froth, many modest homes are also in ruins or on the verge of collapse in Xochimilco, on the southern outskirts of the capital.

The area, a Unesco World Heritage Site, is popular with tourists for its ancient floating gardens and languid canals.

Some quake exiles have taken to setting up communal tables on the unpaved streets outside their wrecked homes, fighting tragedy with conviviality.

Residents have also instituted a rotating night watch to help each other fend off looters.

But solidarity can't fix all their problems.

"We still have no water, and the electricity only just came back," said Hortensia Fernandez, 50, in the empty plot where her house used to stand.

She has cleared away the rubble of her former home, leaving her with a desk, some broken wooden chairs, a small yard and an apple tree. She uses a plastic tarp to protect a few boxes of scattered belongings from the elements.

"We’re all sitting here waiting for them to come rebuild our homes, even if it`s just a ramshackle little house," she said.

"But this is just a neighborhood of little houses, not big buildings like the ones that collapsed so spectacularly."

Across the way, the Lopez family house is on the verge of collapse, its windows broken and its porch covered in rubble.

"The authorities said they’d have to tear it down. But then they never came back. They’ve forgotten about us," said Lorena Lopez.

Her family of six is staying with her sister-in-law down the street. But that house is damaged too.

"It’s tough," she said. "There are nine of us staying in a house that used to hold six. We sleep on the floor, all squeezed in together."

Her septuagenarian mother breaks into tears as she speaks.

"The worst part is losing our family heirlooms," she said.