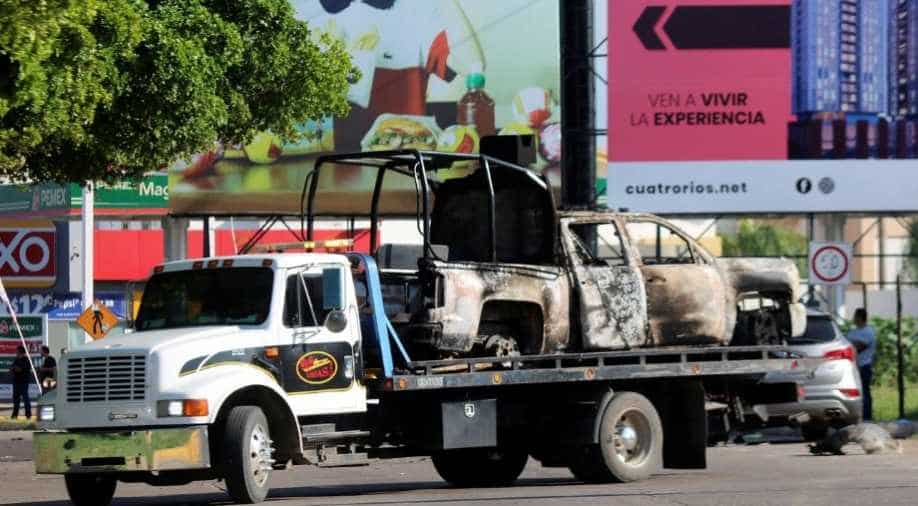 A tow truck transports the burnt wreckage of a police patrol truck after cartel gunmen clashed with federal forces, resulting in the release of Ovidio Guzman from detention, the son of drug kingpin Joaquin 'El Chapo' Guzman, in Mexico. Photograph:( AFP )

Defense Minister Luis Sandoval said they briefly arrested Ovidio Guzman, one of several sons running the Sinaloa drug cartel since their father was extradited to the US in 2017 but released him after being overpowered.

Mexico's president faced a firestorm of criticism Friday as his security forces acknowledged they arrested kingpin Joaquin "El Chapo" Guzman's son, then released him when his cartel responded with an all-out gun battle.

Admitting his troops carried out a "badly planned" operation, Defense Minister Luis Sandoval said they briefly arrested Ovidio Guzman -- one of several sons running the Sinaloa drug cartel since their father was extradited to the US in 2017 -- but released him after being overpowered.

"It was a badly planned strategy," Sandoval told a news conference in Culiacan, the western city of 750,000 people that was turned into an urban war zone Thursday.

"The task force acted too hastily," he added, saying soldiers "improvised" by trying to obtain an arrest warrant midway through.

He added the authorities never "formally detained" Guzman, 28, one of at least nine children "El Chapo" fathered with three wives.

The six hours of clashes left one civilian and seven soldiers dead, and three police wounded, officials said after an emergency cabinet meeting in Culiacan, the state capital of Sinaloa, the Guzmans's bastion.

Heavily armed cartel gunmen surrounded the house where Guzman was being held Thursday afternoon and launched a massive machine-gun assault on various parts of the city, sending terrified residents fleeing for safety and leaving the streets strewn with blazing vehicles.

"I support the decisions that were made. The situation turned very difficult and many citizens' lives were at risk," he told a separate news conference.

"You can't fight fire with fire," added the leftist leader, who said Mexico was acting on a US request for Guzman's extradition, which it received in September 2018.

But the incident turned what was already a difficult week on the security front -- with two other gun battles that killed 28 people -- into a total nightmare for the leftist leader.

"This is a disaster any way you look at it," tweeted security analyst Alejandro Hope.

"What happened yesterday is that the drug cartels are more powerful than the Mexican government. They can bring it to its knees. That's not good," anti-narcotics expert Mike Vigil, former head of international operations for the US Drug Enforcement Administration, told AFP.

In Congress, members of the conservative National Action Party called on Lopez Obrador and his security cabinet to step down.

"Resign!" they chanted on the floor of the lower house.

The government also faced criticism for its murky communications.

Durazo initially said the gun battle erupted when soldiers on a routine patrol happened upon Guzman.

Lopez Obrador, however, called it a planned operation carried out with an arrest warrant. Sandoval said there was no warrant.

The government, which initially released only hazy details, took around 18 hours to admit publicly that it had captured and released Guzman.

"El Chapo," 62, was sentenced to life in prison last July in New York for trafficking hundreds of tons of cocaine, heroin, methamphetamine and marijuana into the United States over the course of a quarter-century.

However, his cartel remains one of the most powerful in Mexico.

His extradition unleashed an initial period of instability in the group, as Ovidio and his brothers waged war with cartel co-founder Ismael "El Mayo" Zambada for control.

But the situation has stabilized into a reluctant truce.

The Guzman brothers have tried to fill their father's shoes, but anti-narcotics experts portray them as flashy party boys who have little ability to run the business side of the cartel.

Lopez Obrador, who took office in December 2018, has struggled to rein in the brutal violence racking Mexico.

The country has registered more than 250,000 murders since the government controversially deployed the army to fight drug cartels in 2006.

Many experts blame the "drug war" for spiralling violence, as fragmented cartels battle each other and the army.

This year appears on track to set a new homicide record, with 23,063 murders as of August.