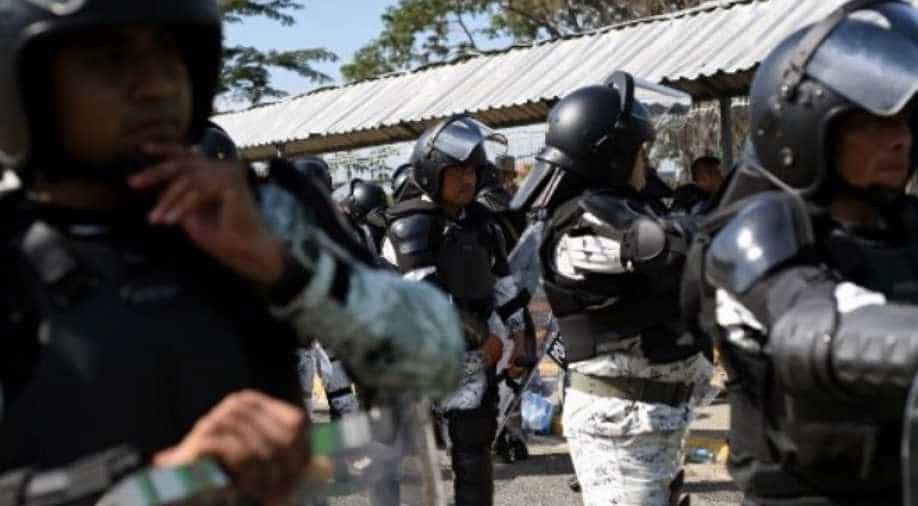 Mexican armed forces stand guard as Honduran migrants wait to cross in Tecun Uman, Guatemala, to Ciudad Hidalgo, Mexico, on on January 18, 2020. On the eve, Mexican President Andres Manuel Lopez Obrador offered 4,000 jobs to members of the caravan in an attempt to dissuade them from traveling on to the United States. The caravan, which formed in Honduras this week, currently has around 3,000 migrants, Lopez Obrador said. Photograph:( AFP )

Mexico had beefed up its forces at the border crossing as it anticipated the arrival of a caravan of some 3,000 people mainly from Honduras and El Salvador.

Mexican troops blocked some 1,500 Central American migrants from entering the country from Guatemala, scuffling with them and thwarting their hoped-for trek to the US and a better life.

Also read: US deports Mexicans far from border, may send others to Guatemala

One National Guard soldier standing guard at a bridge that is a major crossing point and speaking over a bullhorn told the travellers they could not enter without a visa or migration document, and that sneaking in was dangerous.

"Do not expose yourself to people traffickers. Your life is in danger," said this agent, who also told them the idea that the United States will grant them asylum is false.

Most of the migrants left last Tuesday from Honduras and had arrived Saturday morning at the bridge over the Suchiate River, which forms the border between Guatemala and Mexico to the north.

Some of the migrants insisted on getting in but others in groups of 20 or so turned around and headed back to migration holding facilities on the Guatemalan side of the frontier.

Watch: More than 60,000 people are missing amid Mexico's drug war

Mexico had beefed up its forces at the border crossing as it anticipated the arrival of a caravan of some 3,000 people mainly from Honduras and El Salvador.

On Friday, Mexican President Andres Manuel Lopez Obrador offered 4,000 jobs to members of the caravan in an attempt to dissuade them from travelling on to the United States.

Mexico has come under pressure from US President Donald Trump to slow a surge of undocumented migrants who arrived at the US-Mexican border last year.

Trump threatened in May to impose tariffs on Mexico if the government did not do more to stop them.

He has also allowed the United States to send more than 40,000 asylum-seekers back to Mexico while their cases are processed, under the so-called "Remain in Mexico" policy.

Human Rights Watch accused Mexico Tuesday of violating migrants' rights by failing to guarantee the security of those returned by the United States and detaining others in "inhumane conditions."

Tens of thousands of Central American migrants crossed Mexico toward the US last year in large caravans, fleeing chronic poverty and brutal gang violence and seeking safety in numbers from the dangers of the journey.

That prompted Trump to warn of an "invasion" and deploy nearly 6,000 US troops to the border.

Giraffes extinct in at least 7 African countries, listed as 'vulnerable'