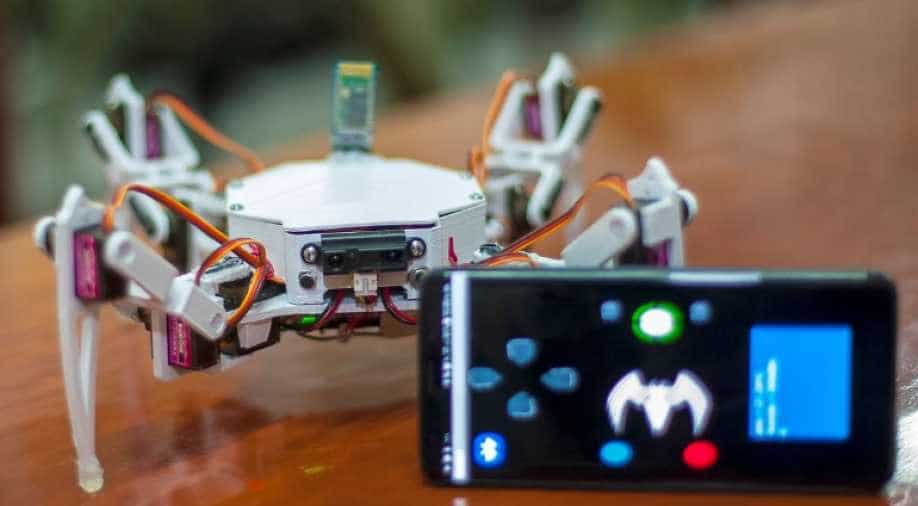 he robot works with a mobile application using Bluetooth and has different sensors to find people trapped in debris, the university said.

Mexican university students have created a spider-like robot that can find people trapped in rubble following an earthquake or other natural disaster, the National Polytechnic Institute (IPN) said.

"Students created the Arachnid Robot for Search and Rescue of Persons (RDB-10) to help emergency and rescue services in natural disasters," the IPN said in a statement released on Sunday.

The robot works with a mobile application using Bluetooth and has different sensors to find people trapped in debris, the university said.

The RDB-10 was designed by students and uses an Android operating system.

The robot has three sensors that detect sound, temperature and the distance to spaces where people may be trapped.

The sound sensor registers noises of up to 400 decibels within a three-meter perimeter, while the distance sensor tracks the ground covered by the robot through rubble.

"The readings taken by the robot are monitored in real time by the spider's operator," the IPN said.

The RDB-10 prototype is light, tough and uses 12 servo motors. The legs were made with a 3D printer using a polymer that is similar to plastic. The RDB-10 has four legs, allowing it to move in every direction.

"The robot's wiring is shielded to avoid a short circuit. The external components are mounted on a copper plate," the IPN said.

Mexico, one of the countries with the highest levels of seismic activity in the world, sits on the North American tectonic plate and is surrounded by three other plates in the Pacific: the Rivera microplate, at the mouth of the Gulf of California; the Pacific plate; and the Cocos plate.

The Cocos tectonic plate stretches from Colima state south and has the potential to cause the most damage since it affects Mexico City, which has a population of 20 million and was constructed over what was once Lake Texcoco.

In 2017, 471 people were killed by earthquakes that rocked Mexico on September 7, September 19 and September 23, marking the worst natural disaster in the country in more than 30 years.

The September 19 temblor occurred on the 32nd anniversary of the magnitude-8.1 earthquake that hit Mexico City, killing some 10,000 people, injuring more than 40,000 others and leaving 80,000 people homeless.

In 2015, Mexico City's government installed a warning system, which uses 8,200 loudspeakers located across the capital's 16 boroughs, to alert residents to an earthquake.

The Seismic Warning System gives Mexico City residents a 50-second alert to prevent a repetition of the tragedy that occurred in 1985.

The warning is generated by sensors along the Pacific coast, located about 400 kilometres from the capital, giving residents time to get out of buildings that could collapse in a temblor.