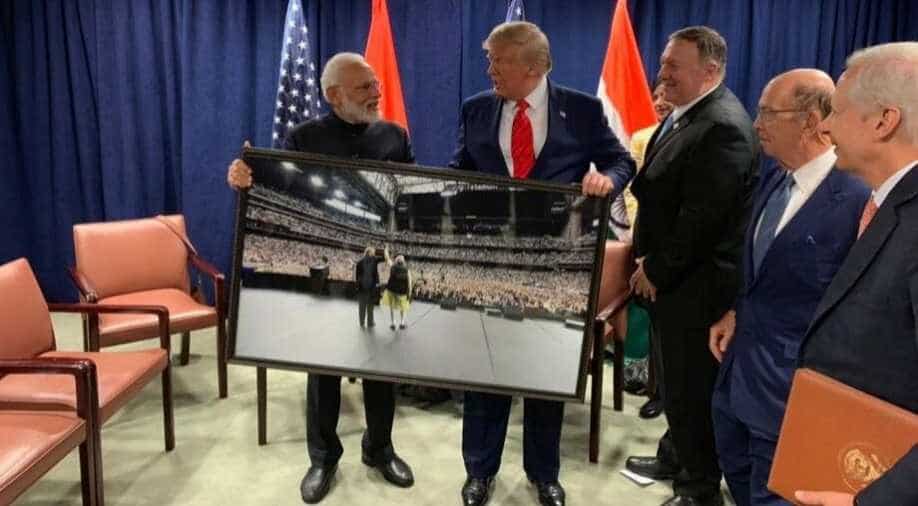 Trump referred to Modi as "Elvis of India" equating the Indian prime minister with the famous US singer.

Prime Minister Narendra Modi met United States President Donald Trump on the sidelines of UN session in New York on Tuesday, during the bilateral meet, PM Modi gifted a framed portrait from the mega 'Howdy, Modi' event to the US president.

"Memories from Houston, where history was made!" Prime Minister's office posted on Twitter while sharing a photo of PM Modi giving the framed portrait to Trump.

"President Trump thanked PM Modi for this gesture," PMO said in the tweet.

Memories from Houston, where history was made!

PM @narendramodi presented a framed photograph from the #HowdyModi event to @POTUS @realDonaldTrump.

Speaking to reporters after bilateral talks, Trump referred to Modi as "Elvis of India" equating the Indian prime minister with the famous US singer.

Trump added that Modi is a great leader and we "will have a trade deal soon."

Speaking to reporters in the presence of PM Modi on the sidelines of UN session in New York, Trump said: "I remember India before was very torn. There was a lot of dissension, fighting and he brought it all together. Like a father would bring it together. Maybe he is the Father of India. We'll call him the Father of India."

PM Modi thanked Trump for joining him in Houston for the ''Howdy, Modi!'' event and said, "He (Trump) is my friend but he is also a good friend of India."

The two leaders had jointly addressed a gathering of over 50,000 Indian-Americans at 'Howdy, Modi' event in Houston on Sunday which showcased India-US bonhomie.