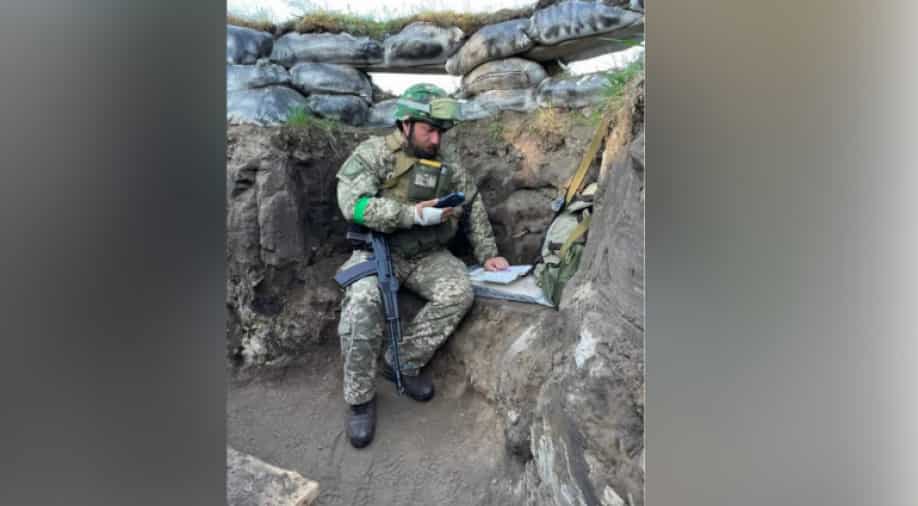 It has been 70 days since he enlisted into the army and hasn’t missed a single class since then.

Fedir Shandor has become a sort of an internet celebrity ever since his photo of giving lessons online while being deployed on the battlefield went viral.

Like many civilians, Shandor joined the Armed Forces of Ukraine at the beginning of the full-scale Russian invasion that began on February 24.

Before that, he used to run a tourism company and teach at a university in western Uzhhorod city of Ukraine.

But all that changed when Russia’s Vladimir Putin started attacking its neighbouring country in a bid to overthrow the Volodymyr Zelensky regime.

However, as a professor, he hasn’t stopped giving lectures even in the trenches. He made an arrangement with his commanding officers and comrades to have a suitable duty roster to be able to hold lectures with his students.

The photo that had become was taken by fellow soldier Viktor Shchaedi. It purportedly shows the professor in army fatigues instructing students via video chat from inside a trench protected by sandbags, according to the New York Post.

The man can be seen with his helmet on and an AK-103 rifle at his side as he holds his phone in a bandaged hand.

“We are fighting for an educated nation. If I did not give lectures, it would be a sin,” Shandor said in a statement issued by Uzhhorod National University, where he teaches classes in tourism and hospitality.

“If there are sounds of shelling somewhere in the background, they do not affect the lecture,” Shandor said in the university statement.

It has been 70 days since he enlisted into the army and hasn’t missed a single class since then.

During that time, he said, he’s held classes at 8 am every Monday and Tuesday.

“I always prefer morning classes: I read, and then you have time for another job,” he added.

The university did not provide his exact deployment but said that Shandor is fighting in eastern Ukraine.

The eastern industrial region, known as the Donbas, has been host to the bulk of the fighting since Russia’s retreat from the outskirts of Kyiv in March.