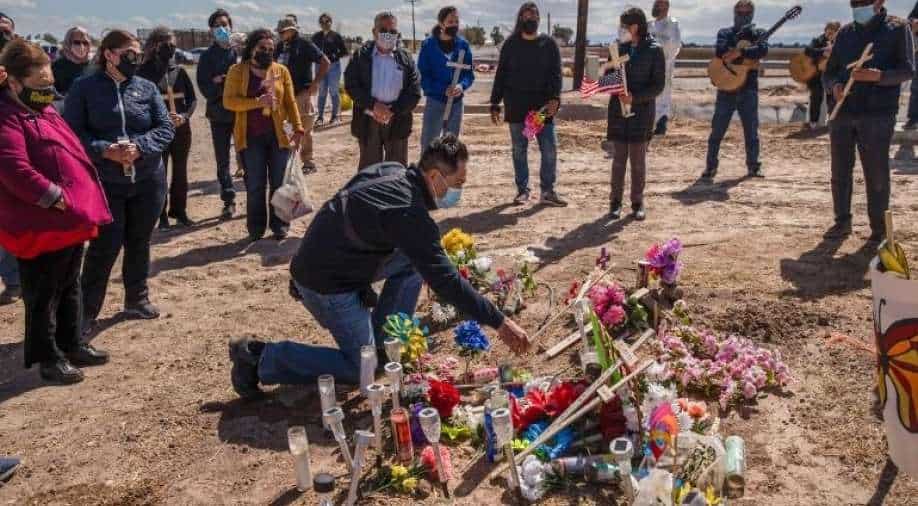 Mourners attend a vigil on March 10, 2021, at a makeshift memorial for the 13 undocumented Mexican and Guetemalan migrants who died on March 2, 2021, when an SUV and a semitruck collided near Holtville, Calif. On Tuesday, March 31, about a month after the collision, federal authorities have charged a man with coordinating the smuggling attempt. (Ariana Drehsler ©️ 2021 The New York Times) Photograph:( The New York Times )

The victims were riding in an SUV that was transporting 25 people when it crashed into a tractor-trailer just after sunrise March 2 on the outskirts of Holtville, California,

Federal authorities in California charged a man Tuesday with coordinating a smuggling attempt that resulted in the deaths of 13 Mexican and Guatemalan citizens in one of the deadliest border-related crashes in decades.

The man, Jose Cruz Noguez, 47, a resident of the United States, was accused of arranging transportation for people entering the country illegally, according to a statement from the U.S. Attorney’s Office for the Southern District of California.

The victims were riding in an SUV that was transporting 25 people when it crashed into a tractor-trailer just after sunrise March 2 on the outskirts of Holtville, California, in the Imperial Valley, a rich agricultural region and a busy corridor for migrant smuggling. The crash occurred about 12 miles from the Mexican border.

“These smuggling networks seek maximum profit by moving as many people as possible across the border with zero regard for their safety and well-being,” Randy Grossman, the acting U.S. attorney for the Southern District of California, said in the statement. “Cramming dozens of people into eight-passenger vehicles and driving recklessly to avoid detection shows an utter disregard for human life.”

Cruz was charged with conspiracy to bring aliens to the United States outside a port of entry and causing serious bodily injury or placing a life in jeopardy, which carries a maximum penalty of 20 years in prison; as well as transporting migrants without legal status for financial gain, which could carry a maximum penalty of 15 years of imprisonment.

He was arrested Monday and appeared in federal court in El Centro, California, before U.S. Magistrate Judge Ruth Bermudez Montenegro on Tuesday.

Smugglers along the U.S. border with Mexico often use vans or SUVs to transport large numbers of migrants to cities — often charging thousands of dollars per person — after meeting them in remote areas once they have managed to enter the United States. Car wrecks near the border are common, but fewer have occurred during the coronavirus pandemic.

About two weeks after the crash near Holtville, eight immigrants were killed in southwestern Texas when a pickup truck they were riding in crashed head-on into another pickup during a police chase, the authorities said.

No law enforcement agencies were chasing the SUV that crashed outside Holtville on March 2, according to the authorities.

The vehicle had entered the United States at a spot where a fence along the border had been dismantled. According to the authorities, surveillance footage reviewed by the Border Patrol showed two vehicles — a GMC Yukon and a Ford Expedition SUV — crossing through a 10-foot gap in the 18-foot-high steel bollard border fence around 5:30 a.m.

The Yukon apparently burst into flames after crossing through the fence; Border Patrol agents extinguished the fire and apprehended 19 people who were hiding in the surrounding brush.

The Border Patrol did not immediately respond to a question about what happened to the survivors of the crash.

An associate of Cruz who was arrested in connection with a different episode of smuggling this month said he had originally been recruited to drive the Expedition on March 2, but declined, according to the U.S. attorney’s office.

The associate secretly recorded a conversation with Cruz, authorities said, in which Cruz said that he had been involved in the March 2 episode and that his other associates had cut the border fence.

Cruz will be represented by a federal public defender. An organization of federal defense lawyers in Southern California did not immediately respond to questions Wednesday evening.