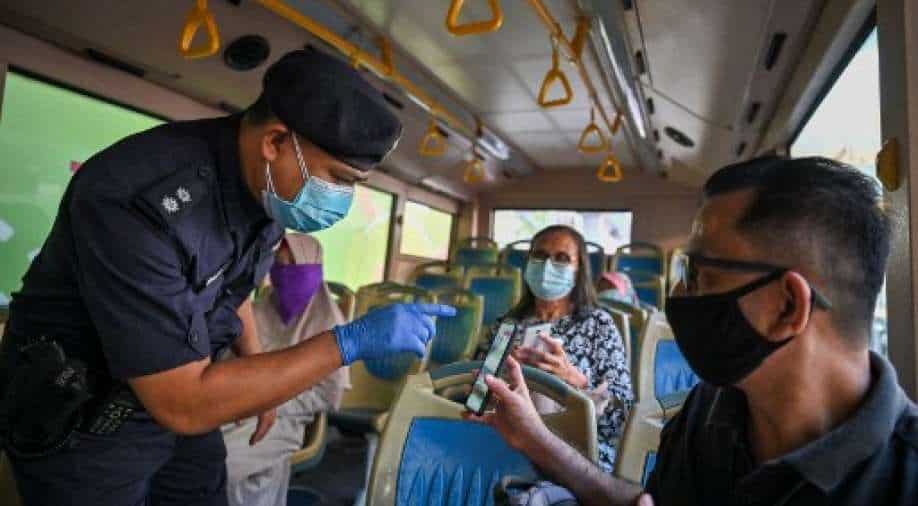 A policeman inspects the travel documents of a passenger on a bus at a roadblock during the nationwide lockdown, amid fears over the spread of coronavirus, in Kuala Lumpur  Photograph:( AFP )

The government aims to vaccinate at least 60 per cent of the population by October. According to the White House, one million Pfizer-BioNTech coronavirus vaccines will be donated to Malaysia by Monday.

Authorities in Malaysia have said new restrictions will be imposed in capital Kuala Lumpur with the city battling the pandemic.

The new rules are set to last for two weeks which include keeping only essential businesses open as the country last week extended the national lockdown.

PM Muhyiddin Yassin had said earlier that restrictions will not be eased until daily COVID-19 cases fall below 4,000. The country recorded nearly 7,000 last week. The country so far has recorded 758,967 total infections and 5,254 fatalities

Last month the number of COVID-19 cases had shot up to over 9,000 cases as economic activity was halted as the government ordered an indefinite lockdown.

The aid package also includes a financial package to ramp up vaccination in the country with just six per cent people receiving both doses of the vaccine so far.

The World Bank has cut Malaysia's growth forecast from  6 per cent to 4.5 per cent this year due to the pandemic's impact.

The government aims to vaccinate at least 60 per cent of the population by October. According to the White House, one million Pfizer-BioNTech coronavirus vaccines will be donated to Malaysia by Monday.

Thailand which has also been hit by the virus had announced in end June that it will set up checkpoints in the country's four southern provinces near Malaysia with COVID-19 cases on the rise in the country.

Reports say several areas in Kuala Lumpur and Selangor state have been placed in enhanced movement control order (EMCO) until July 16 in order to halt the virus surge.

Under the EMCO rules, residents cannot leave the house after 8 pm with only one person in the house allowed to venture outside for essentials.