'Making Taliban great again': Billboards with Biden dressed as Taliban militant pop up in US 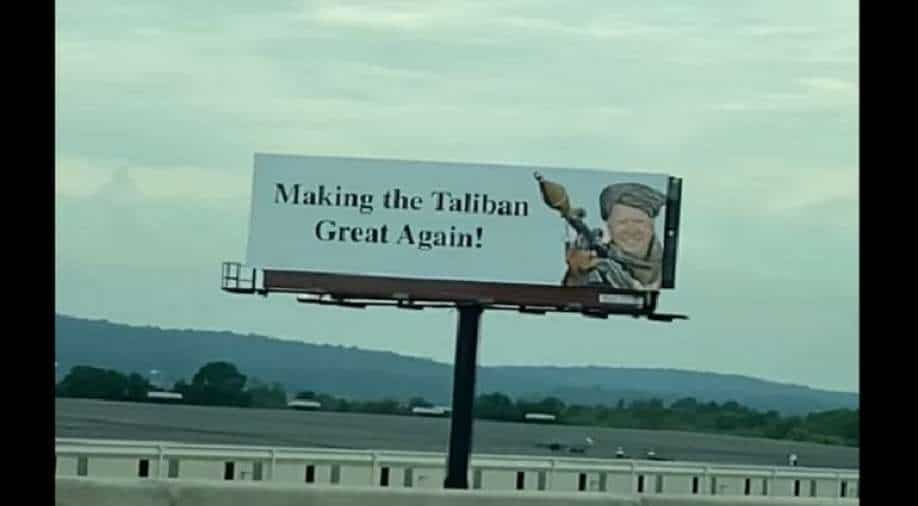 Billboard with Biden dressed as Taliban militant pop up in US Photograph:( Twitter )

On the billboard, Biden is dressed as a Taliban militant in military gear and was holding a rocket launcher with the words 'Making the Taliban Great Again!' plastered next to him

A few days after the US completed withdrawal of American troops from Afghanistan, some people from the western nation are still expressing their disappointment over their President's decision.

One such expression came out in form of billboards of Joe Biden all over Pennsylvania. The state saw several billboards pop up in different locations in which Biden's face was showcased but with a twist.

Biden was dressed as a Taliban militant in military gear and was holding a rocket launcher with the words "Making the Taliban Great Again!" plastered next to him.

Mastermind behind these billboards is a former Pennsylvania state senator, Scott Wagner, who is a Republican and represented a district that includes York County from 2014 to 2018.

"The pull out rushed through by President Biden had made us the laughing stock of the world," Wagner told local media house, Fox News, in an email. "The Taliban are openly stating that they ran the United States out of Afghanistan – they are now very emboldened."

Wagner said he is disappointed and worried that the freedom that "young people have experienced since we landed in their country will be taken away now that the Taliban is in control".

However, he has also cleared that these billboards will not be taken down anytime soon and will be on display for at least two months.

"I'm not hiding from anybody, and that's how I feel," he said, "and I decided to put the billboards up."

He also claims to have talked to several war veterans in the recent past who disagree with Biden's decision.

"What do we say to families who lost loved ones in the Middle East – the country these people served and died for left Afghanistan with its tail between its legs," he told Fox News. "It seems that President Biden was hell bent on rushing out of Afghanistan – his ego and lack on information is going to prove to be very bad for the United States."

Wagner reportedly paid $15,000 for more than a dozen of these billboards all over the state. He liked the image that was forwarded to him by someone in his contacts, and he decided to put it up for display.

He said he hopes more such billboards will pop up across the country as some people have even contacted him for permission.