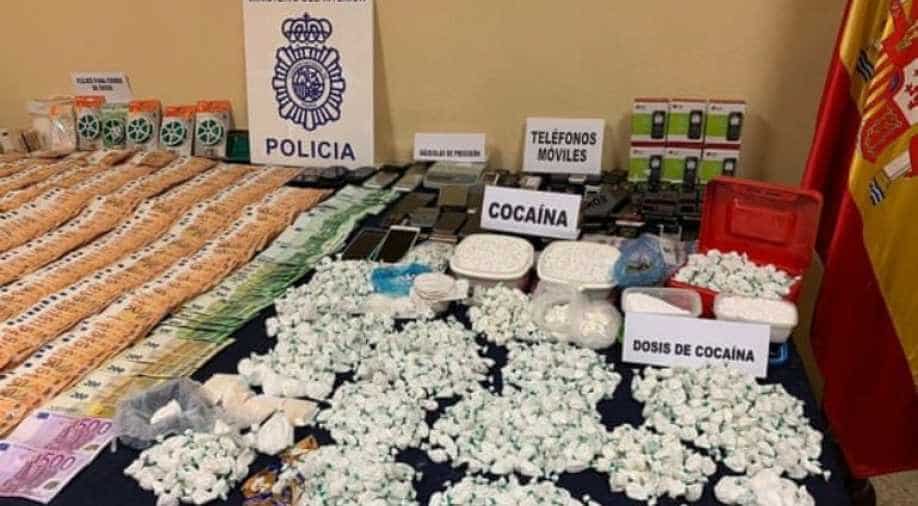 Evidence seized in an operation against a drug trafficking network in Madrid Photograph:( Twitter )

Instead of delivering to customers’ homes, it arranged for the drugs to be handed over in supermarkets close to where its distributors lived.

Spanish police have dismantled an elaborate cocaine distribution ring in Madrid which had more than 2,000 customers, delivery time guarantees and a loyalty reward system, and adapted tactics to keep running during the COVID-19 lockdown.

The network apparently sold its wares in single doses bearing a seal of quality and operated a loyalty scheme to reward its best customers.

Investigators also discovered that the gang had found ways to adapt to Spain’s strict Covid-19 lockdown, which came into effect on 14 March and which ends this Sunday.

Instead of delivering to customers’ homes, it arranged for the drugs to be handed over in supermarkets close to where its distributors lived. While movement was severely restricted during the beginning of confinement, people have always been allowed out to buy food.

The operation had an "extensive logistical infrastructure", complete with a call centre, police said on Wednesday.

Also read: How antibody drugs are different from vaccines

The police sting, involving 250 officers spread across 21 locations, arrested 28 people and seized close to 4 kgs of cocaine, as well as 85,000 euros.

“The investigation began a year ago when officers notices several sales of single batches of cocaine,” the force said in a statement.

“The speed and manner in which the transactions were carried out led them to suspect that this wasn’t the usual modus operandi. Subsequent surveillance and inquiries established this was a criminal organisation dedicated to the distribution of cocaine using a ‘coke hotline’.”

Officers uncovered a complex set-up in which phone orders were relayed to a network of 25 distributors in eight different parts of the Spanish capital. Cocaine was then delivered to customers’ homes – or workplaces.