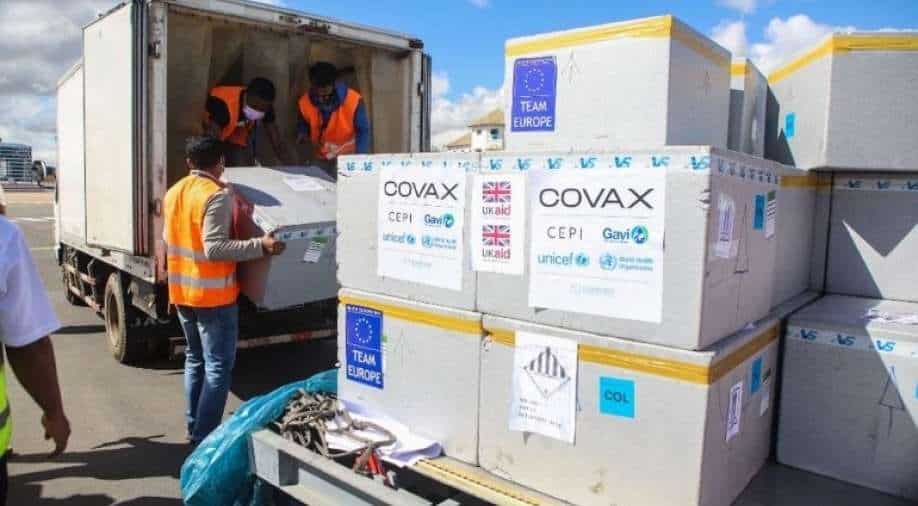 Workers load boxes of Oxford/AstraZeneca Covid-19 vaccines, part of the the Covax programme, which aims to ensure equitable access to Covid-19 vaccinations, into a truck after they arrived by plane at the Ivato International Airport in Antananarivo, Madagascar, on May 8, 2021. Photograph:( AFP )

The first shipment of 250,000 Oxford/AstraZeneca jabs landed on the Indian Ocean island nation on Saturday

Madagascar on Saturday received its first batch of coronavirus vaccines through the Covax global sharing scheme, one of the last countries in Africa to obtain the prised jabs following months of resistance by the president.

While countries across the globe scrambled to secure doses of the precious shots, Madagascar's President Andry Rajoelina showed little interest in inoculation and instead continued to promote a locally brewed herbal drink as the only required coronavirus "cure".

But an unprecedented infection resurge last month forced Rajoelina to bow to growing criticism of his handling of the pandemic and agree to a vaccine rollout.

The first shipment of 250,000 Oxford/AstraZeneca jabs landed on the Indian Ocean island nation on Saturday.

The plane was met by a delegation of government officials and United Nations representatives, although Rajoelina himself did not attend the ceremony.

"The inoculation is among several efficient preventative measures that will be added to strategies already implemented by the state," he added.

Madagascar's coronavirus response has so far revolved around an infusion based on the anti-malarial plant artemisia and distributed freely across the island.

Dubbed Covid-Organics (CVO), the drink's effects have not been scientifically tested and the World Health Organization issued several warnings against its use.

Rajoelina, however, has touted the tea as a "miracle" coronavirus remedy and snubbed all vaccines.

The president asserted in March that he had no intention of getting the jab and was in no hurry to launch mass inoculation for his citizens.

Madagascar has meanwhile been grappling to contain a spiralling second wave of coronavirus infections.

Over the past month, health facilities in the capital Antananarivo have been overwhelmed by a rising number COVID-19 patients compounded by oxygen shortages.

A weekend curfew was implemented three weeks ago in an attempt to curb the spread of infection in the city, forcing everyone off the streets from Friday evening to Monday.

Antananarivo resident Heritiana Rasoamiaramanana told AFP via telephone the government's delay in securing vaccines had been a "grave mistake".

"Since the beginning, the majority of Malagasy have doubted the effectiveness of CVO," said the 39-year-old business owner.

"But the president has continued to insist... that we can trust this magic potion and do not need to get vaccinated," he exclaimed. "Shame on him!"

More than a third of Madagascar's coronavirus cases have been recorded in the past month alone.

Till date, the country of 27 million inhabitants has registered 38,874 infections, including at least 716 deaths.

Covax seeks to ensure poor countries have equitable access to vaccines to combat the pandemic.

The facility is co-led by the World Health Organization, the Gavi vaccine alliance and the Coalition for Epidemic Preparedness Innovations.