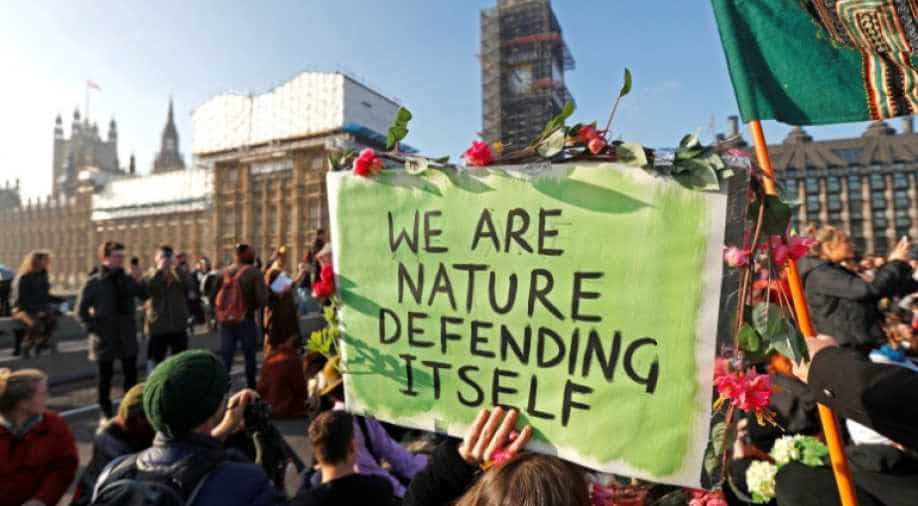 Organisers of the 'Extinction Rebellion' event said they wanted to put pressure on Britain's government to take greater action to slow climate change and eliminate greenhouse gas emissions by 2025.

British police said they arrested more than 70 people at an environmental protest on Saturday, after demonstrators blocked five bridges across the River Thames in central London.

Organisers of the 'Extinction Rebellion' event said they wanted to put pressure on Britain's government to take greater action to slow climate change and eliminate greenhouse gas emissions by 2025.

The protest centred for several hours on Westminster Bridge, near Britain's parliament, but there was also disruption to traffic on four other bridges.

Hundreds of people protested near Westminster, carrying banners with messages including "Stop Climate Breakdown", "Fossil Fuel Era Over" and "Rebel For Life".

"This is an act of mass civil disobedience. This is the start of an international rebellion protesting the lack of action on the ecological crisis," one organiser, Gail Bradbrook, told reporters.

Police said demonstrators had mostly been arrested for obstructing the road, and had no immediate information on charges or the total number of protesters.

Organisers said more than 6,000 people had been involved.

"The demonstration is having a direct impact on others across London who wish to go about their daily business - and (stopped) the emergency services from using the bridges to travel around London," police superintendent Waheed Khan said just before the bridges reopened.

Britain reduced greenhouse gas emissions by over 40 per cent between 1990 and 2016, and the government has committed to a total reduction of 80 per cent by 2050.

The Extinction Rebellion campaigners are calling for emissions to be reduced to zero on a net basis by 2025.