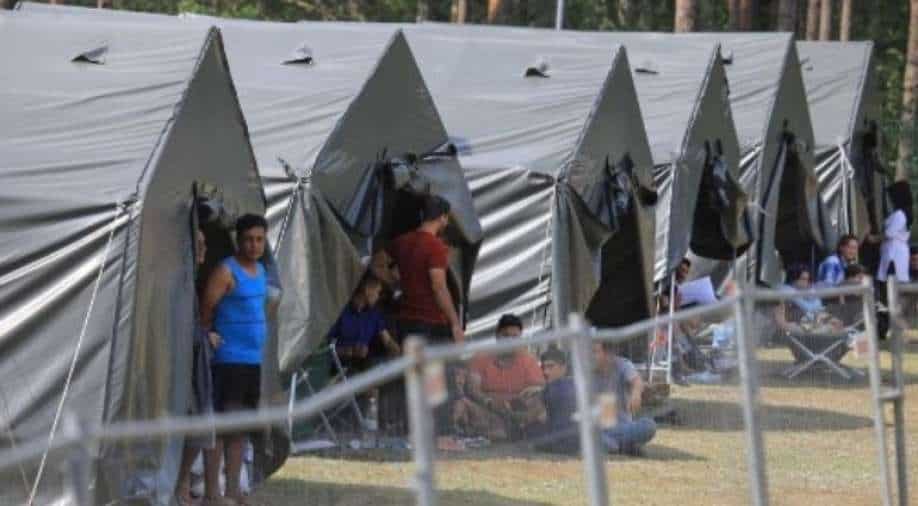 Migrants are seen through a fence as they stand and sit by tents in a camp near the border town of Kapciamiestis, Lithuania, on July 18, 2021. Photograph:( AFP )

Asylum claims will be processed within ten days of the new law, which the government says will help separate genuine refugees from economic migrants

Lithuania on Wednesday adopted a law that restricts migrants rights and speeds up asylum claims, following a spike in arrivals from Africa and the Middle East via Belarus.

President Gitanas Nauseda signed off on the legislation but called it "flawed" and asked for parliament to amend it later this year.

Nauseda said that vetoing the law altogether would have sent a "completely unacceptable signal to the countries of origin".

The law allows for migrants to be detained for up to six months and makes it harder for them to appeal against asylum rejections.

"Today we have the law which violates fundamental principles of human rights and humanity," Akvile Krisciunaite, a researcher at Diversity Development Group, told AFP.

"Human rights are the same for everyone, whether we are talking about migrants or Lithuanian citizens."

The government has said the law will allow asylum claims to be processed in 10 days in order to swiftly separate genuine refugees from economic migrants.

Foreign Minister Gabrielius Landsbergis visited Iraq last week to persuade the country to establish an effective readmission policy, but he said Baghdad was "cautious" about the matter.

The Baltic EU member state has seen more than 2,200 arrivals since the start of the year across the border from Belarus.

Lithuanian officials suspect that the influx is being orchestrated by the Russia-backed Belarusian regime as a form of retaliation against EU sanctions, calling it "hybrid aggression".